2016-03-19: Geocaching History in Pecos Texas and a Couple of Cemeteries

With the move last weekend from Lubbock down to Monahans, Texas, we didn't get a chance to go Geocaching and exploring. So today was a good day to get out and explore some new areas and pick up some new counties. Candy had to work a few hours this morning so we got a late start.

We headed west on I-20 towards Pecos and by now it was getting close to lunch time and neither one of us have eaten anything all morning. So a quick Google of restaurants in Pecos and I decided on Old Mill BBQ and Burritos. I ordered the BBQ brisket and sausage, while Candy ordered a cheese burger and fries. And we still got the traditional nachos and salsa while waiting for our food. All the food there was pretty good, so it'll definitely be getting a return visit from us. 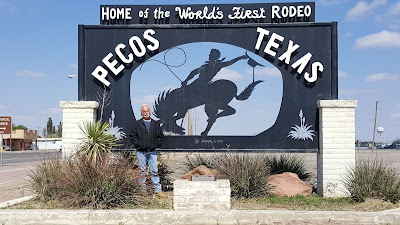 Now that we have full bellies, it's time to go exploring and Geocaching! Out first stop was at the rodeo. The first cache (GC234FP) was to highlight that the town of Pecos hosted the worlds very first rodeo. Held a block south of the Pecos courthouse on July 4, 1883. The rodeo started with claims of three cattle ranches having the fastest steer ropers; the NA, the W, and the Lazy Y ranches.

Settlers in town for the Fourth of July picnic were spectators. The prizes were blue ribbons cut by pocket knife from a new dress of a 4-year old girl in the crowd.

The best roper was Morg Livingston of the NA Ranch and second place was Trav Windham of the Lazy Y. 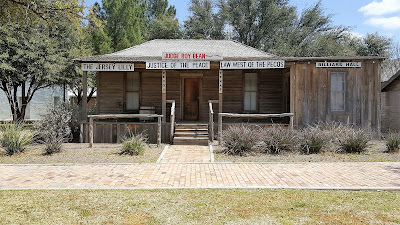 Just down the road was the West of the Pecos Museum and our next Geocache (GC47RDM). On the outside was a replica office and courthouse of Judge Roy Bean, Justice of the Peace and the Law. Phantly Roy Bean, Jr. (c. 1825 – March 16, 1903) was an eccentric U.S. saloon-keeper and Justice of the Peace in Val Verde County, Texas, who called himself "The Law West of the Pecos". According to legend, Judge Roy Bean held court in his saloon along the Rio Grande on a desolate stretch of the Chihuahuan Desert of southwest Texas. After his death, Western films and books cast him as a hanging judge, although he is known to have sentenced only two men to hang, one of whom escaped. 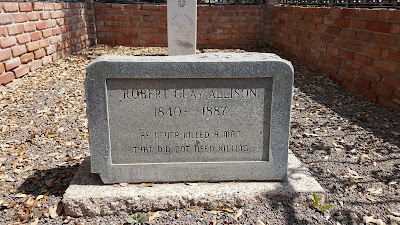 Next to the office was the gravesite of Clay Allison. Robert Clay Allison (September 2, 1841 – July 3, 1887) was a cattle rancher, cattle broker, and sometimes gunfighter of the American Old West. He fought for the Confederacy in the Civil War. Allison had a reputation for violence, having survived several one-on-one knife and gunfights (some with lawmen), as well as being implicated in a number of vigilante jail break-ins and lynchings. He is posthumously known as the man who "...never killed a man that did not need killing." A drunken Allison once rode his horse through town nearly naked—wearing only his gunbelt.

Also on the grounds was an old jail replica and the Mesquite House, the oldest house in Pecos. 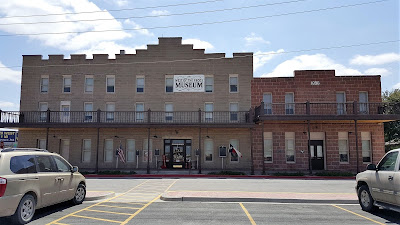 Then came the museum itself. On the right was the original saloon and hotel on the left. Touted as the “best hotel between Fort Worth and El Paso”, The Number 11 Saloon, with guestrooms on the second floor – was built in 1896 of Pecos Valley red sandstone. The quarry was just 8 miles east of Pecos. The three story hotel was added in 1904 by R.S. Johnson. Mr. Johnson, a retired Texas Ranger, was in charge of the saloon and his wife ran the hotel. The hotel served as a headquarters for land promoters, salesmen and families of settlers in the early years of Pecos Valley development. The hotel and saloon were restored in 1962 and opened as the West of the Pecos Museum in 1963. Many civic organizations and groups contributed volunteer hours and resources to the museum’s exhibits. Original pressed tin ceiling, hand – carved newel posts were preserved.. Most of the furnishings in the Number 11 Saloon are original. Over 50 rooms of pioneer history and memorabilia are housed in the old hotel and saloon. 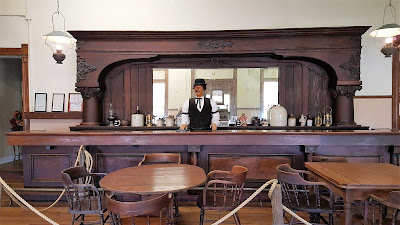 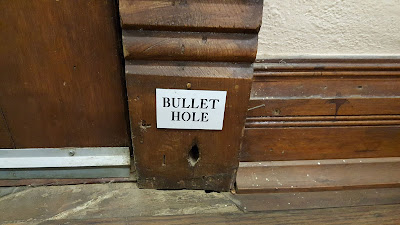 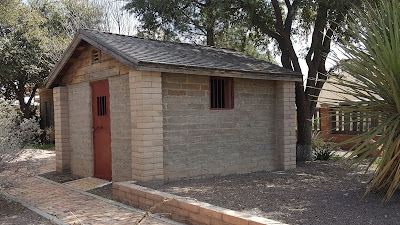 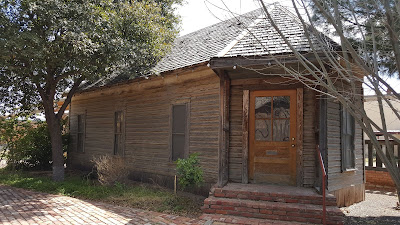 A few blocks away was the Old Pecos Cemetery (GC1P62N). The original burial site of the gunslinger Clay Allison before being relocated outside the museum. The Old Pecos Cemetery was used from 1880 to 1910 by settlers in the Pecos Valley. Originally established for railroad construction workers who died during the building of the railroad. There are only 6 marked graves remaining and some wooden crosses for the unknown. 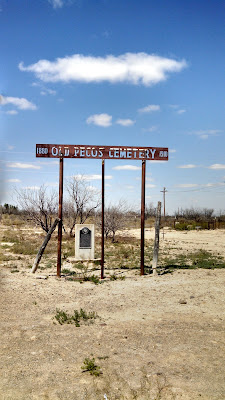 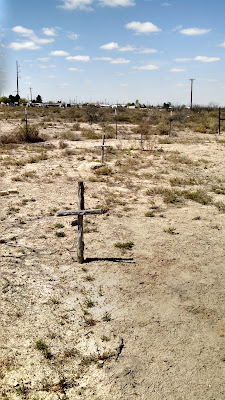 Leaving Pecos, we headed north on US-285 to Hwy 302 into the small town of Mentone. A quick rest area cache (GC2H0BC) on the west end of town before getting a virtual cache (GC621F) at the Loving County Courthouse. Though I don't understand the name that well considering that "Loving" County is the LEAST populated county in the lower 48 states! In September 2000, National Geographic Magazine did a series of articles on various Zip Codes in the United States. Here is a link to their website for this location: Zip Code 79754. 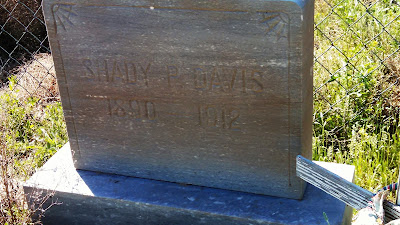 Our next cache and always a favorite was one placed at a cemetery (GC638RA). Since Loving County is sparsely populated, there aren't any "official" cemeteries. Burials are typically on the family ranch. This Geocache was the only cemetery cache located within the county and had only 3 grave sites. The first was dated 1912 for Shady Davis. Shady Davis was a young cowboy who was fatally injured by being dragged by his horse during a roundup. The two other graves were from 1992 and 2007.
Located on the Slash (Johnson Brothers) Ranch but accessible via a few oil field access roads, it was some rough driving for the GeoPrius. We both agreed (again) that it was time for a Jeep! One of these days... Anyway, we got to within .15 miles from the cemetery when we encountered a rut I thought to be too deep for the car. So we hiked it the remaining way. 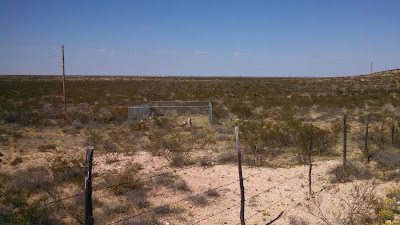 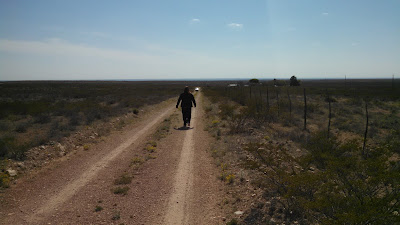 After another lonely cache in the middle of nowhere (GC2MX4H), we continued north on US285 almost to the New Mexico state line. There was the location of our next historic Geocache (GC36AG6) along the old section of the Pecos River Railroad. First opening in 1891, it later merged with the Panhandle and Sante Fe Railroad in 1948. Eventually this original section was abandoned in 1990-91. 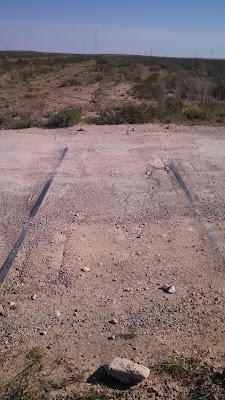 That was pretty much it for the day. Not a whole lot, but we did have a good adventure and especially enjoyed touring the museum and learning about the history of the area. Tomorrow we have a big hike planned, so we hope you return for that. See you soon.
Posted by Mark at 12:34 PM