Back in Florida, Candy and I went on some pretty challenging hikes with our Geocaching friends. Remember BoonieMan Springs and The Quest for the Apocalypse? Well today was one of the toughest hikes we've done so far.  Even last month at Palo Duro Canyon seemed like a stroll in the park in comparison. Today we set out to climb Guadalupe Peak (GC4EEF). 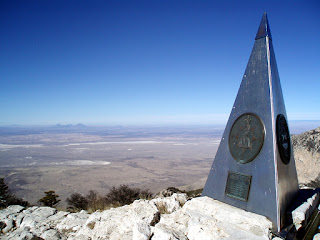 Located within Guadalupe Mountains National Park, the Guadalupe Peak is the highest point within the entire state of Texas. Towering at 8,749 feet, it is a 3000' climb from the trailhead at the parking lot! I think that's what got to us right from the start. Checking the GPS when we got back, we were already at 5839'. And for us "sea-level folks," we were at a disadvantage and just breathing was a challenge. But I'm getting ahead of myself.

We tried to get an early start, having packed some snacks in Candy's backpack and I had 2 cold bottles and 4 frozen bottles of water in mine. Leaving Monahans around 7:30 this morning, it was just over a 2-hour drive to the Parks visitors center. Heading west on I-20 turning north on US-285 in Pecos. While in Pecos, we gassed up the car and got some breakfast snacks and drinks since we haven't eaten yet. I also grabbed a Gatorade because I figured I'd get tired of drinking water. 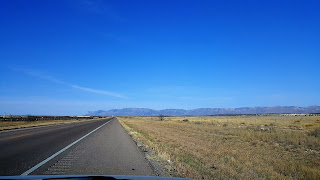 After turning west on Hwy 652 in Orla, TX, it was long before we began seeing the mountains rising up from the horizon. This was a nice change because for months now Texas has either been mostly flat or canyons. Now, even 30-40 miles away, we begin to see the mountains. And we couldn't have picked a better day with clear blue skies and morning temperatures in the 40's.

After following Hwy 652 across and reaching the TX/NM state line, we turned southwest on US-62/US-180 which runs along the edge of the mountain range leading into the National Park. Now we can get a good look at the terrain of the mountains driving past the Frijole Ridge. 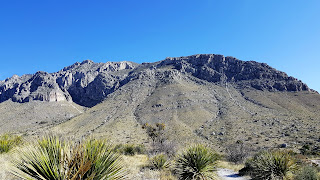 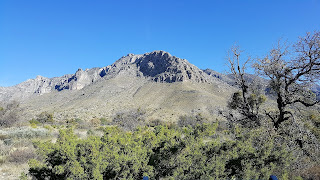 We finally arrived at the Pine Springs Visitor Center, the SE entrance to the park and over 80 miles of trails throughout the wilderness. There was also displays of the different wildlife and plants we might encounter on our hike. Though with the exception of many species of birds, we didn't see any other wildlife. Other than of the human variety. This was also the last chance for the next 8.4 miles and 5 hours to use the facilities!

Now it was time to get started. We left the visitor center and drove the half mile down to the trail head parking. Gathering up the backpacks, GPS, cell phones, keys, hiking stick, and making sure we had everything possible we were going to need, we walk over to the trailhead. And what do you think I see? A self-pay station. I figured they would have a charge to get into the national park. But I was expecting an entry gate or even being able to pay at the visitors center. Then we could use our credit/debit cards to pay the $5 each entry fee. I wasn't expecting to put cash in the envelope like most smaller parks and therefore didn't think to make sure we had plenty of cash on us. Digging in my pocket, I had $6, Candy had $1, and I managed to find $3 in change in the car! Completing the form on the envelope and placing the tear-off on the dashboard, FINALLY we are ready to begin hiking. 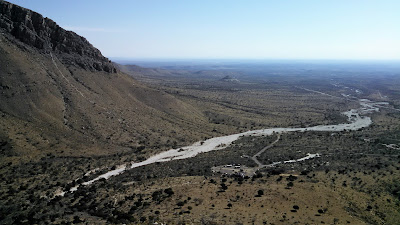 After just a couple hundred yards, we quickly realized that elevation makes a big difference! Our lungs had a hard time getting the required amount of oxygen required for hiking up this mountain. The trail quickly began with many switchbacks climbing higher and higher. After ascending about 500', I noticed something that sounded like a rhythmic drum. Almost as if there were Indian war drums sounding off in the far distance. After a few seconds, I realized that I'm hearing my own heart beating trying to distribute the needed fuel to my leg muscles! After almost an hour we started getting acclimated to the altitude and our breathing, though still elevated, became more normal. It was definitely a great cardio workout! 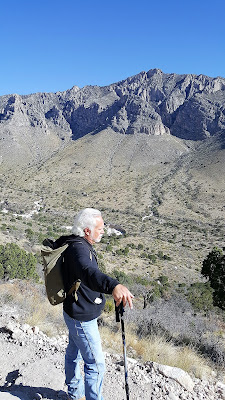 Along the way up we were passed by about a dozen hikers, I think all were younger. Finally at about the 6700' mark, we caught up to two guys taking a break. My first question to them: "Are you also sea-level folks?" YEP! One was from Houston and the other from the valley. (not sure where "the valley" was) But this was their first hike. We chatted for a few moments, they took our picture for us, and we passed through. 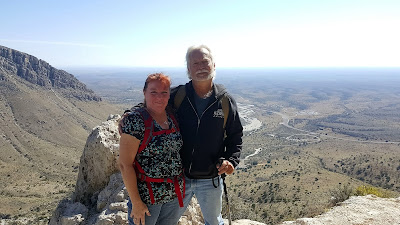 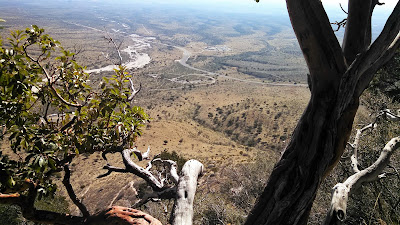 By now our breathing and heartbeat rate was more normal for hiking as we became used to the altitude and we could enjoy the views more as well. The temperature was probably in the 50's now and felt good in the sun. The next 1000' wasn't as steep as the first. There were longer, more gradual stretches of trail and fewer switchbacks on the second mountain we had to pass around on our way to Guadalupe Peak.

There were also more trees and shade on this section. And with the increasing wind gusts, consistent breeze, and higher altitude, it got cold enough for Candy to put her jacket back on.

We saw a lot of different variety of birds, though we couldn't get any good photos of them. This one bird flew by so fast it was like watching a fighter jet. It flew up, did a half loop and away, twice within about 20 seconds.

And then there were these trees which had a strange bark to them. They almost looked like a normal tree coated with a thick orange liquid that hardened in place over it. We only saw about 5 or 6 of these trees not too far from each other. If you happen to know what these were, I hope you leave a comment below with the name of them. 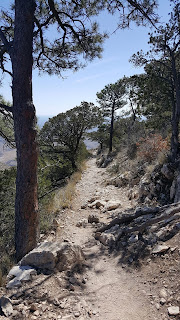 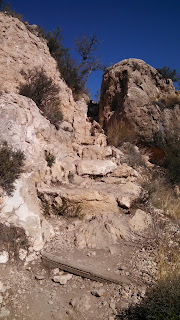 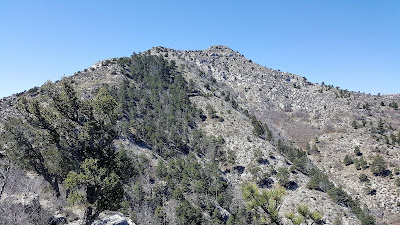 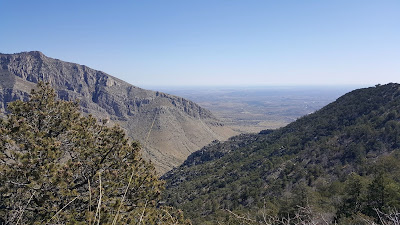 At 7,700 feet (2,000' up from trailhead), we took another short break and encountered our first hiker coming down the mountain. He said he started out at sunrise. After that a few more hikers began trickling by on the way down the mountain. All saying the same thing; "you're almost there!" Yeah sure. Thirty minutes have passed since we first were told that and we're still can't see the silver pyramid at the peak!

The last 1000' was like the first 1000', rougher terrain and a steeper ascent. There was one section where the rock had fallen away and the trail disappeared so the park service built a short bridge to cross over along the trail. 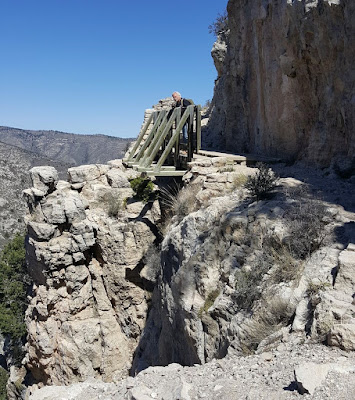 There were a few times along the trail where the snow had not yet melted. Typically shaded by the trees and in the cracks of the rocks, protected from the sun and staying cold. 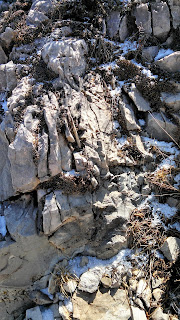 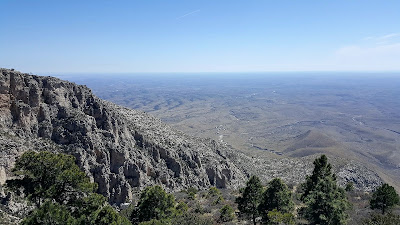 It finally got to the point where we could see the finish line. The last leg was the toughest climb. According to the GPS, we were just 0.25 miles to the peak. Yet we still had a 500' climb to the top. Several steep switchbacks and rocky narrow trails ahead. We could see the tip of the silver pyramid monument. We were almost there for real! 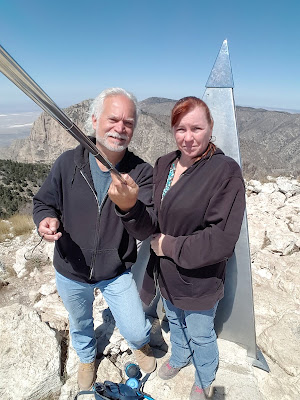 YAY! We made it to the top of Guadalupe Peak! At 8,749 feet, the highest point in the state of Texas. A difficult climb, but well worth the views. When we reached the top there were about a dozen hikers scattered about the rocks relaxing and having their lunch.

Well all but four rather rude hikers who camped out right there around the monument and started eating. One of which was standing and leaning against the monument taking pictures all around. So Candy and I sat nearby getting something to drink and snack on. Candy began assembling the selfi-stick so we could take our photo. One of the four left to walk around and take some other photos, but three were still blocking the way for not only ours but several other newly arriving hikers.

Finally I just had to get rude myself and ask them to move so we and others could take a photo by the monument without them being in our photo! The one girl who was leaning against it thought she would be fine trying to hide behind it until one of the other guys with her told here she should move out of the way.

Finally getting our chance, we stood in front for our photos. You can probably tell this was my first time using a selfi-stick! We just bought it yesterday for this hike. I gotta remember to hold it with the outside arm and away so the stick is not in the picture! It was hard to see if the blue tooth connection was working and taking pictures. We did manage to get two photos before moving away and not hogging the spot so others could get their photos. 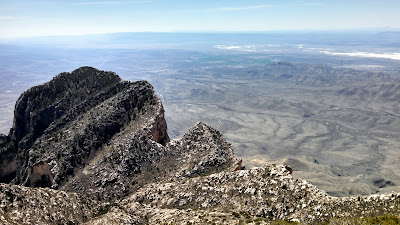 Going down was pretty good in the beginning, but that didn't last long. Most people think that climbing is the hardest, but in reality going downhill is worse. Climbing is harder on the muscles, descending is harder on the joints because of the constant impact. Having broken her foot and ankle in the past, it wasn't long before Candy's feet, then knees and hips to begin hurting.

For the first half of the way down, we hiked along with this other couple from Oklahoma. The conversation helped with keeping out minds off the aches and pains that were beginning to build up. At one point they took a short break and not long after we took a longer break allowing them to pass. That was the last we saw of them. I guess we were slowing them down. 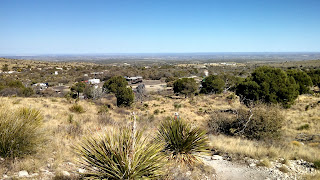 Once we finally had the parking lot, and more urgently needed bathroom facilities in view, our pace picked up a little. Seeing the GeoPrius never felt so good! After 8.4 miles on a strenuous rated hiking trail, a total of 6000 feet in total elevation change, taking the backpack off and sitting in the drivers seat was so nice. Even knowing we still had a 2-hour drive back home.

There are still four more virtual caches and even more traditional Geocaches within this park, but just the one along this Guadalupe Peak trail. Even though we may feel the effects of this hike in our muscles and joints for days to come, it hasn't deterred us from returning again for more punishment! Our Geocaching adventure hiking friends back in Florida would be so proud of us. Hiking all this way just for one virtual Geocache!
Posted by Mark at 2:20 PM