Today was a day to go Geocaching and to finish up some of the caches we had planned for yesterday but ran out of time. Candy was also sick with the cold, but didn't want to sit around the apartment. So we got a late start and will try to get as many as we can.

Our first stop was at Springlake Cemetery (GCMV7E), the only remains of the Springlake ghost town. Well maybe not a ghost town per say. The whole town just moved. This burial ground served the original residents of the Springlake community. The area was opened for settlement in 1908 by the George C. Wright Land Company. It was named for the nearby Springlake Ranch. D.B. Shiflet donated the first two acres for the cemetery. The first burial took place in 1909. Of the 356 known graves, five are unmarked. The community of Springlake was relocated in 1935, 4.75 miles southeast. The town once had a hotel, supply store, school and post office. But only the cemetery remains at the original site. As for the cache, well it must have relocated also. It hasn't been found in almost two years.

A few caches later and we arrived at the next Geocache of interest (GC38T16). The old Waggners Grocery Store located on US-385. Located just south of Dimmitt, TX, I could not find any history of the grocery store or when it closed down. But this is what remains today. 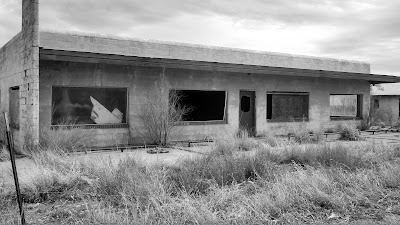 A few miles up the road is this long and almost forgotten Flagg Cemetery (GC4XKVM). I couldn't find any other history on this cemetery other than what's on the monument. Used between 1920-30 and the cache page states that a local farmer mows it every once in a while. Most of the graves are marked with just a cross without any name. There's only two headstones with names and dates. 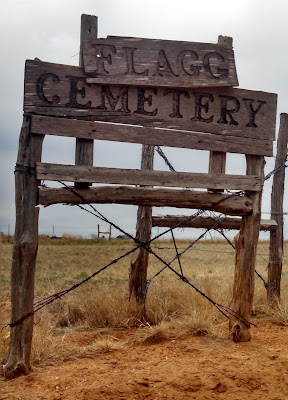 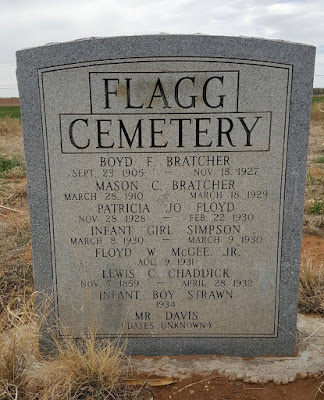 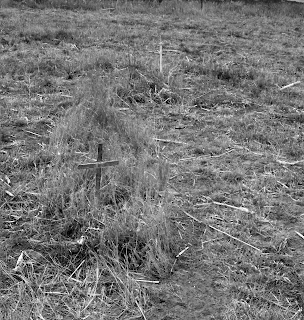 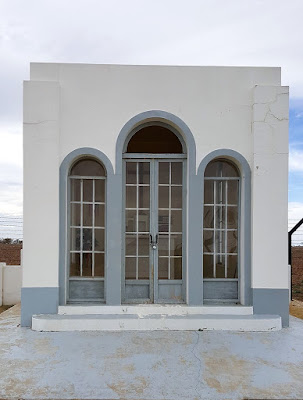 Several more caches later and we made it up to Hereford, TX. There was the location of our next historically significant cache (GC1GNK4). According to the Texas State Historical Association's Handbook of Texas Online, during World War II, Hereford became the site of a prisoner of war camp named the Hereford Internment Area or Camp Hereford. Covering a section of land, the camp was constructed in July 1942 at a cost of two million dollars. Italian prisoners occupied the site from April 1943 to January 1946. The first American Military Police unit arrived in 1943. Italian captives arrived in April of that same year. The prisoners were brought to Hereford by train and marched the approximately 4 miles to the camp. The first prisoners were escorted by guards who had no ammunition since it had not arrived yet. By September of 1943, the camp contained 5,000 prisoners. The openness of the flat high plains of Texas served as a deterrent to escape since escapees would be easily spotted. However, one escapee named Luigi Montalbetti traveled 300 miles toward Mexico before he was recaptured by the Texas Border Patrol.

The maximum-security policy was soon replaced by a policy of maximum utilization, and enlisted men were hired out to work on local farms at a rate of ten cents an hour. The officers, however, were incarcerated in separate compounds and not required to work. The mutual regard that developed between the prisoners and their captors was shown at St. Mary's Catholic Church in Umbarger Texas. There, seven Italian officers and two enlisted men made wood carvings, painted murals, and installed stained-glass windows, donating their labors in the spirit of Christian brotherhood. Parishioners reciprocated by providing them with bountiful meals. Each night the Italians smuggled the surplus back into the officers' compound, which was under a retaliatory starvation order from April through December 1945. 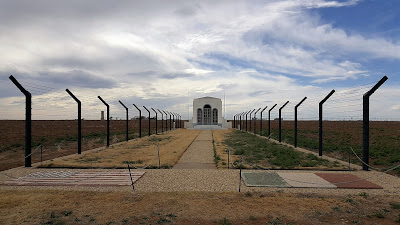 In late summer 1945, as the Nons (non-collaborators) recognized that the war was wrapping up and they would soon be leaving, they began to think of the five prisoners who had died while at Camp Hereford. What would become of these men after the war? They almost certainly would be forgotten in the otherwise unmarked area east of the camp designated as the cemetery. They concluded that a memorial was needed, both to mark the gravesites and to serve as remembrance of their deceased friends. Using scavenged bricks, broken glass, surplus materials, and a few purchased supplies, they built a small chapel in just a couple of weeks, complete with an altar, double French doors, stained-glass windows, and a marble-like concrete surface. They dedicated it with a plaque honoring the five men. The men were eventually re-interred at Fort Reno, OK. in 1947.

Rapid repatriation began with the end of the war, and in January 1946 the last 4,000 prisoners boarded special troop trains for their return to Italy. The camp was placed on the surplus list on February 1, 1946. All that remains today is a water tower, swimming pool and the memorial chapel constructed by the POWs. A 13-by-13-foot plaster-over-brick chapel, now vandalized, memorializes the five POWs who died in the camp. 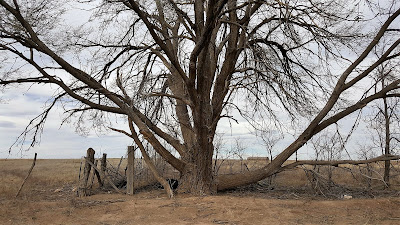 After nine Geocaching finds and two DNF's, we headed back to Lubbock. Probably the best stop today was the POW chapel. If you like to travel and learn about history, Geocaching is definitely the game to play. Where do we go to next?
Posted by Mark at 12:47 PM