2017-12-02: Our Adventure to the Painted Churches in Schulenburg, Texas

WOW! What a day! Have we got a lot to show you today. We took a drive and visited some of the historical Painted Churches from the late 1800's around Schulenburg, Texas. The Painted Churches of Texas were built by the Eastern European pioneers who settled the area in the late 1800's and early 1900. Somewhat ordinary on the outside, but ornate, Gothic and colorful on the inside. But I'm getting ahead of myself. 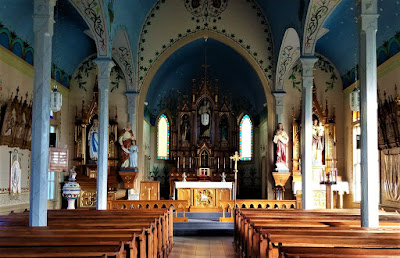 We had to take a drive down to Schulenburg for business matters, so of course the first thing I do is look up Geocaches along the way to find. That's when I discovered the Painted Church's and knew they were the perfect stops along the way. 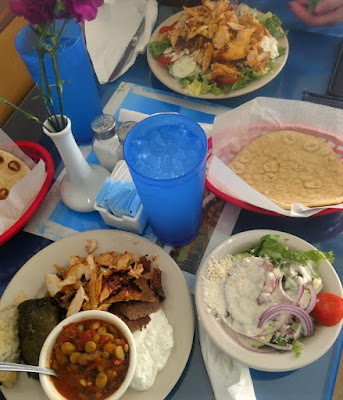 Leaving Killeen, we headed south down Hwy 195 into Georgetown. Since we're there and it's close to lunch, we made our first stop to check out Plaka Greek Cafe. We're always in the mood for some good Greek food! And this turned out to be THE place! Candy got her go-to Greek salad with grilled chicken, although they cook the chicken on a rotisserie skewer just like the gyro meat. I ordered the sampler platter to get a taste of everything. It was excellent! The meat was seasoned perfectly and wasn't dry. The dolmades (stuffed grape leaves) was fresh without that bitter store bought taste. The spanakopita (spinach pie) was flaky with just the right amount of spinach and cheese filling. Everything right down to the pita bread was really good. We'll definitely be returning back to this place again. (Just a side note: while I try to write as if these adventures just happened, you can see by the date in the title and the blog post date that I am nearly two years behind. But the Plaka Greek Cafe in Georgetown, TX is so good that I want to mention we actually drive down the 30 miles to it just to eat as often as we can. We highly recommend this place if you ever find yourself in the area.) 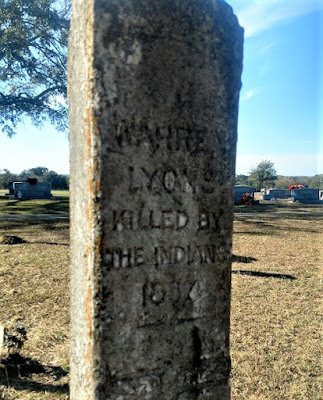 OK, enough about food. Our first Geocache (GC3N74V) was located in an early settlement area a few miles south of Schulenburg at ghost town of Lyonsville, later shortened to just Lyons. An early town on land grant of Keziah Cryer, it was named for settler James Lyons.  By 1860's the town had stores, a school, a church and a Masonic lodge. During the Civil War, property was ruined and stock driven off. Settlers moved away to nearby towns and the town died off.

James Lyons moved his family to Texas from New York in 1820. While working outside his cabin on October 15, 1837, Lyons was killed by Comanches. His was the first grave in what became the Schulenburg City Cemetery (GC74XJB). His 12-year-old son was captured in the attack and held by the Indians for about 10 years before he was able to return home. In 1848 he married Lucy Boatright. They later settled in Johnson County, where he died in 1870. A stone erected here in 1931 states incorrectly that Warren Lyons, rather than his father James, was a victim of the 1937 raid. 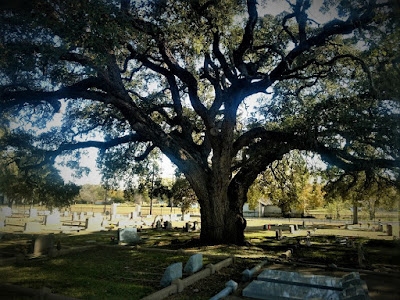 Heading back north towards home we found the first of the Painted Churches on our route. The town of High Hill grew out of three smaller German settlements Blum Hill, Oldenburg, and Wursten. Blum Hill in the southern part was named after left-wing political activist Robert B. Blum, who was executed in Vienna in 1848 during Germany's Revolution. Oldenburg in the north was named after a German Province. And Wursten came from the name of a sausage from Anders Butcher Shop. In 1858, they all combined into one community and called it High Hill to remind them of the mountains they left behind. With the immigration of German and Austrian settlers the town began to flourish. But in 1874 fearing the railroad would ruin their tranquility and cultural community, they declined it's request to pass through town. The Galveston, Harrisburg, and San Antonio Railroad built a few miles to the south in Schulenburg. Many of High Hills residents and businesses moved to the south as well causing High Hill to decline. Current population tends to hover around 100. 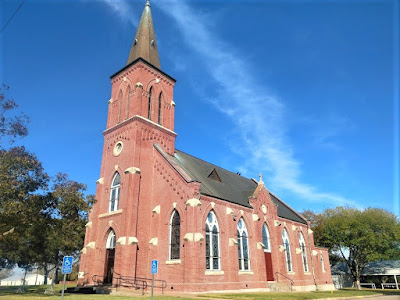 The main attraction is the St. Mary Catholic Church (GC12EJ3). The Parish played a significant role in the German and Catholic heritage of Texas. The Catholic State League was formed here, and many of the church's clergy and leadership were raised here. The first St Mary Church was built in 1869. A larger building was built in 1876, and the smaller building used a school. This newer building featured stain-glass windows donated by the people of the parish. When the current larger still church was constructed in 1906, the original stain-glass windows were moved into it. The church was painted in 1912. The St Mary Catholic Church of High Hill, Texas is known as the "Queen of the Painted Churches." 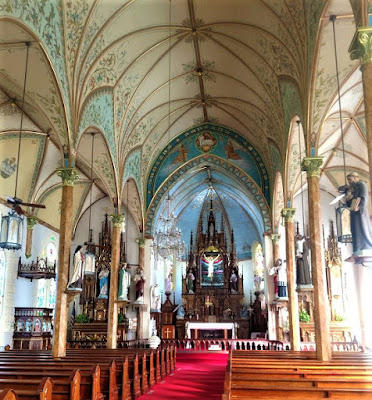 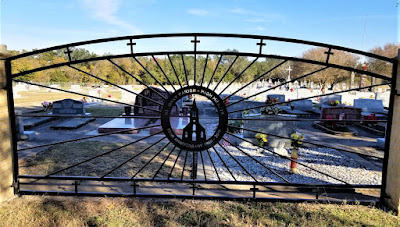 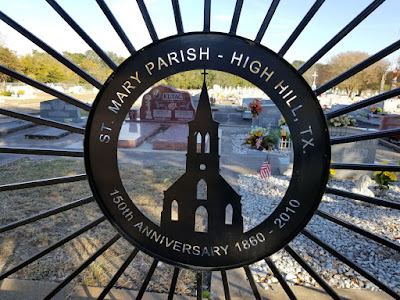 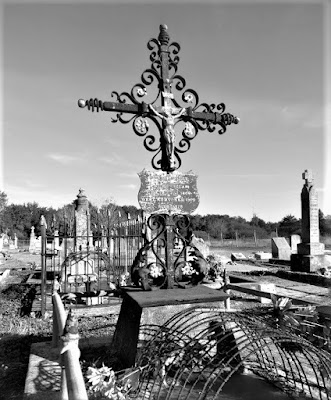 Traversing the back country roads to get to our next Painted Church in Dubina, Texas, we came upon this old single lane bridge crossing the East Navidad River. Built in 1885 by the King Bridge Company in Cleveland, Ohio, it has been given the name of Piano Bridge. Some say it's because of its musical sound as you drive over it. But leave it to engineers to ruin that and tell us its technically a "piano-wire" truss. It is one of the few remaining iron bridges in Fayette County. Whatever you want to call it, I call it one cool historical bridge! 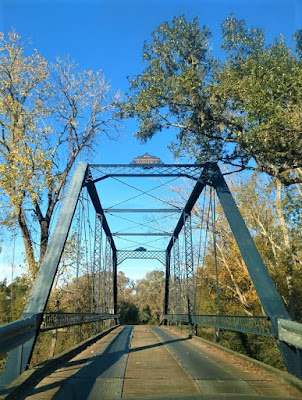 In November 1856 a group of Czech settlers found shelter from a strong north wind and hail under a grove of large oak trees. The community, originally called Navidad and then Bohemian Navidad after the nearby Navidad River, became the first Czech settlement in Texas. Augustine Haidusek, who learned English during the Civil War and became the first Czech lawyer in the United States, renamed the town Dubina which is Czech for "oak grove." The town flourished reaching 600 families around 1900 as favorable reports of Texas reached the old country back home, and new immigrants came through Dubina. Between the railroad bypassing Dubina in 1873, a hurricane in 1909, and a large fire in 1912 that swept through town, many settlers left the area. As of 2000 the population was listed as forty-four. 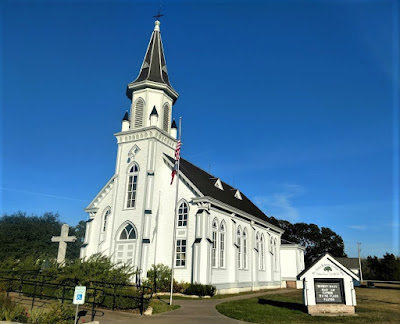 The first Saints Cyril and Methodius Church (GC12EJ7) here was constructed after the Civil War in 1877. Tom Lee, a freed slave and blacksmith, made an iron cross to mount atop the steeple. The hurricane in 1909 destroyed that church. After raising over $5500, the town rebuilt the church in 1912 which was nearly destroyed by the fire. That same iron cross which was salvaged from the previous church once again stood tall over the new church. There are no surviving records of who or when the walls were faux painted. But believe it or not, sometime in the 1950's the decorative walls and ceilings were whitewashed over. In the 1980's two longtime residents took on the task of painstakingly uncovering and restoring the original paintings. Taking a look inside and I'm glad they did. Truly a beautiful and historic church. 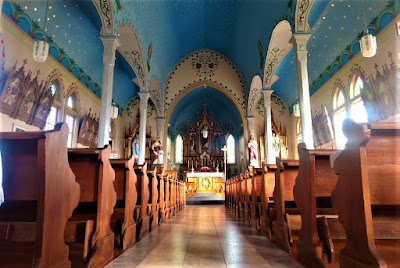 And just like it was back in the day, still no indoor plumbing. If you gotta go, then you gotta go outside!

Just a few miles to the north was our next church and geocache (GC746Z3). Ammannsville, Texas was settled by German and Czech immigrant farmers during the 1870's. Andrew Ammann, an architect and farmer, was the first settler arriving on March 12, 1870. The first business opened in 1876. And by 1879 a post office and school. By 1900 the town had grown to three stores and saloons, two blacksmith shops, one drugstore, one doctor, and two gins. The community had 800 residents at its peak. But the post office closed in 1906, and the school in 1909. The 2000 census had the population down in the forties.

The St John the Baptist Catholic Church first opened in 1890. It was also destroyed by the 1909 hurricane. The community rebuilt and dedicated the new church on November 24, 1910. However it was destroyed a short time later by fire and had to be rebuilt again. 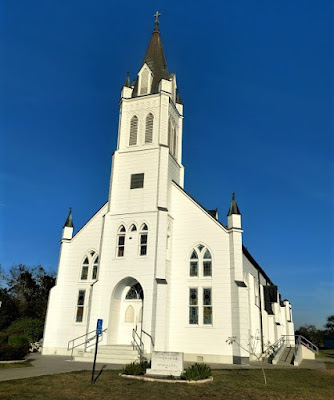 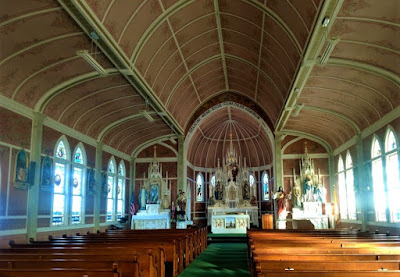 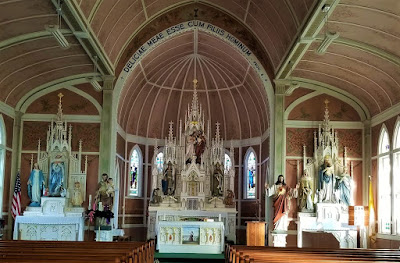 As with the other Painted Churches, this one also had a graveyard which served the community. Trivia fact: a graveyard is a cemetery that's located next to a church. 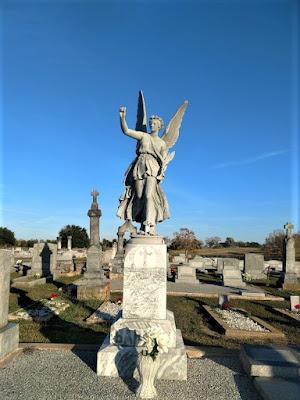 Out there in the middle of nowhere was our next stop and a rather cute geocache. The Kaase Bubble Gum Post Travel Bug Hotel (GC5A9V2) was a nicely built cache to mimic a hotel large enough to host travel bugs. TB's are items with a trackable number on them. Geocachers place them in caches for other cachers to retrieve and move along from cache to cache. I've release TB's in Florida that have since traveled all over the world. And I've picked up TB's here in the states that began their journeys all over the globe. 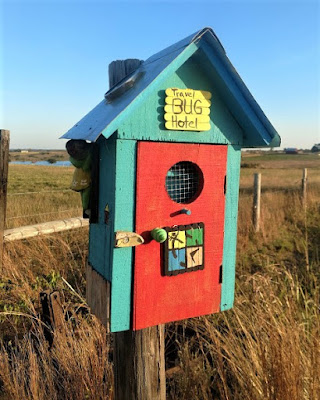 Our final stop for the day was for the Wood's Fort Virtual Cache (GC7D5A). Virtual is fitting since there are no remains left of the actual fort. A fortified residence used by colonists of this vicinity as a protection against Indian attacks from 1828-1842. Mr. Woods was a veteran of the War of 1812, one of the old "three hundred" of Stephen F. Austin's colonists, and the oldest man killed in the Dawson Massacre on September 18, 1842. 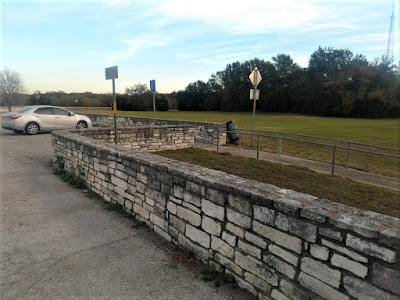 That's it for today. I hope you have enjoyed our days journey. Hmmm where to next?
Posted by Mark at 7:49 PM