So welcome back and a quick recap of where I'm at. Because my wife was pulled from our Christmas vacation and sent on a business trip to Baltimore, I decided to drive there from Texas to surprise her. Yesterday I drove over 500 miles and stopped just west of Memphis, Tennessee, over on the Arkansas side. Along the way the GeoDogs and I are stopping for caches in needed counties to fill in those empty spaces on the map. In case you missed it, you can read all about Day 1 here before continuing to fill you in on the Why, Where, and Wohoo! 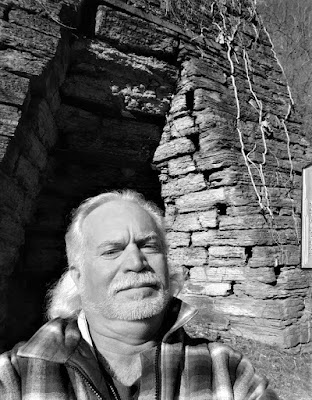 Waking up at dawn this morning in Brinkley, Arkansas, I loaded up the GeoDogs in the car and we began Day 2 of our Surprise Road Trip. Brinkley is located in Monroe County and one that I needed. Not far from the hotel was a park with a simple and quick cache, Best Park Ever (GC1XC5F), I could easily grab and be on my way. And not to worry about muggles this early in the morning.

Back on the road and a long stint before the next scheduled cache county. Eastbound on I-40, across the Mighty Mississippi River, through Memphis after 105 miles we arrive in Shelby County, Tennessee at a town called Arlington. It wasn't right off the exit, but the NoWhere Road cache (GC3RYBG) was pretty easy to get to and I thought it wouldn't take much time away from traveling. Found it quickly but the container was empty. Added a new log sheet and was on my way.

Taking the backroads back to the interstate, I passed by this old abandoned spooky house. It would have been cool to go exploring inside. But it was beyond the fence on private property. So just photos for now. 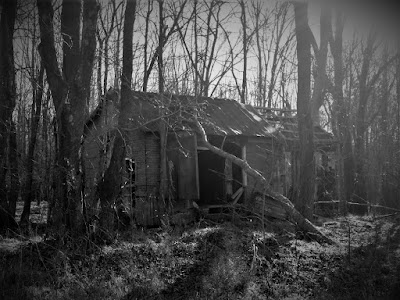 Just twenty-six miles down the interstate was my next stop in Haywood County and a quick cache called Koko Moto (GC2GAB3). A quick find right off the exit and return eastbound quickly.

Forty-seven miles later and I find myself in Henderson County at the Independence Cemetery. A small unincorporated community in Tennessee just a few miles from the interstate. The cache was called Earn Your Independence (GC111HB). Cemetery caches are among my favorites because of the stories and history that could be found in them. With the small church and graveyard it was hard to resist not taking a quick walk among the headstones. The cemetery was well kept with the exception of the space between these two headstones. Husband and wife headstones. I've heard about some people who don't want their burial site to be well mowed grass because they like gardening, trees, vines, etc. Could this be the reason? Or perhaps turmoil and chaos in the marriage? Hmmm. I guess we'll just have to imagine what truth has been confined to the grave. 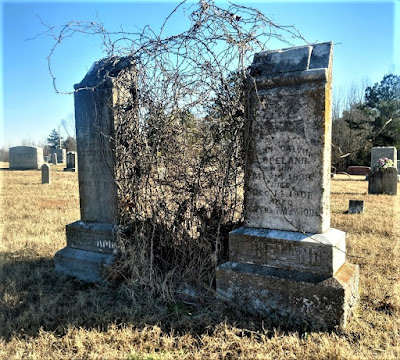 Continuing east and across the Tennessee River, I arrive in Humphreys County and grab a quick off the exit cache. Pond Bottom at Cuba Landing (GCX8NR) was a quick cache with a view of North Fork Blue Creek. A quick stop for the cache and to let the Chihuahuas take care of their business. 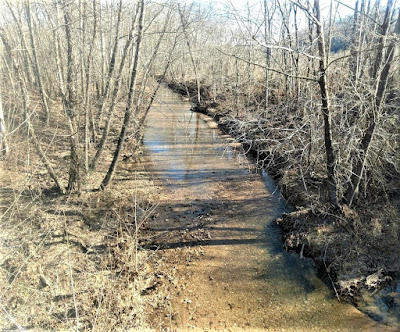 A short 14 mile drive later and I'm in Hickman County at another unincorporated community called Only, TN. Here was an Earthcache called Lee & Gould Furnace (GC15QK3). Samuel Lee and James Gould built the furnace in 1833 as part of an ironworks that employed hundreds. They located here due to the proximity of the raw materials needed to produce iron. The furnace stands as a reminder of an early industry. 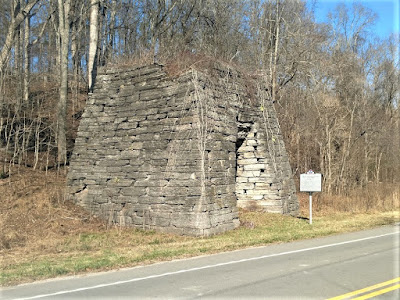 Williamson County was the next stop thirty miles east. The Flying Alphabet cache (GCX9NE) was at a truck stop near the exit. A nice quick stop that I could park next to it and let the GeoDogs out as a distraction while I made the find.

The next exit down was Cheatham County and another quick right off the exit No Map Needed cache (GC3V7K4) in a busy shopping area. Again I was able to position the car to block the view from muggles to make the quick find.

Thirty-eight miles and through Nashville later, I arrived at Wilson County for my next cache. Wash Day at Belinda City (GC1DVEN) was just the cache needed right off the exit at the edge of a parking lot for a quick find to keep me moving forward.

Next was a nice long stint of 115 miles over to Roane County. The New Years Resolution cache (GC5JHVJ) was so close to the exit it was practically still on the exit!

Sixty-seven miles later and passing through Knoxville, I arrived in Sevier County and the town of Kodak. There I grabbed Scorpio the Scorpion cache (GC3Q3DT) to claim a county find.

Speaking of Knoxville, they have one of my favorite cache finds. I found Knoxville's Fastest Headstone (GCNBF5) way back in 2008. The cache is located near the headstone of A. J. Pete Kreis who was from Knoxville. He was a favorite to win the 1934 Indy 500 race but was killed during practice when his car crashed over the wall and burst into flames. If you've ever watched the race on TV and in the intro do a brief history of the race, they usually show that crash. Well his giant rectangular headstone has the track outlining it and his car going over the wall. Pretty cool to see if you're ever in the Knoxville area.

My last cache for the day was in Hamblen County off I-81 in Morristown. Pull Out #3 cache (GCMJ18) is another one of those quick park and grab at the exit caches for the highway traveler.

Welcome to Virginia! Finally making it through Tennessee longways east to west, I drive another 115 miles to Marion, Virginia. When I got off the exit ramp I'm staring at these signs and begin to chuckle so I just had to take a picture. You got the Atkins (diet) to the right or the Hungry Mother to the left! Well I thought it was funny. Maybe cause I was driving for 625 miles, I'm tired, and ready for a hotel. I should make it to Baltimore tomorrow to surprise my wife. Talking to her on the phone a few minutes ago, she now thinks I'm still in Texas driving around the state Geocaching. With the freezing temps there in Baltimore, she's starting to come down with a cold and not feeling too good. Hopefully arriving with her puppies and myself will cheer her up! Come back tomorrow to see what happens! 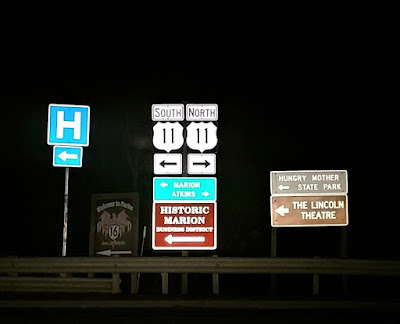