My Wife has a Big Heart and I Love Her Very Much! She's always willing to put others needs before her own. Being a therapist in a nursing home facility is almost like being in the medical profession. Wait, it is a medical profession. What I mean is that the only holidays she gets off is when it falls on the weekend. Fortunately this year, she is between facilities. The new Director has taken over where she was in West Texas but the new facility in Killeen hasn't opened yet. That's why her company has been using her to train others.

My job has shut down for a week and a half for the Christmas / New Years holidays. So we had the entire time off together. NOT SO FAST! She got a call begging her to help at a facility in Midland to cover on Monday, Christmas Day as well as Tuesday the 26th. Her big heart and willingness to help says OK. We'll still have a whole week at the house in Killeen for a vacation.

So yesterday we decided I would take her to work in Midland and drop her off before going back to the apartment in Monahans. There I would finish packing, load up the dogs, pick her back up after a few hours, and continue east towards Killeen. NOT SO FAST!! Just before I picked her up, her boss called to say they're sending her to Baltimore for two weeks to train some more directors there. Oh, and her flight leaves in a few hours! So back to Monahans, repack with scrubs for work, and back to the airport in Midland. I guess it's just me and the dogs for the next week. 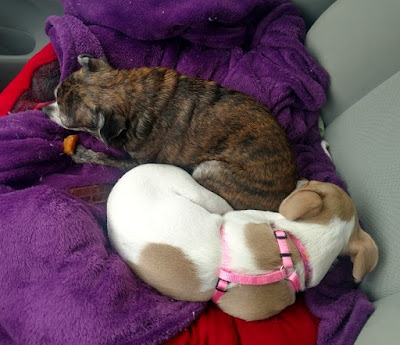 Well on the remaining four hour drive to Killeen, I was feeling sad and depressed about our vacation vanishing. But then it hit me! I got a whole week! I'll stay the night in Killeen, but continue driving to Baltimore and surprise my Sweet Wife! I can get there and back in a week easy. So last night I called the hotel she was staying at to see if they allow small dogs but they said no. There was one nearby that did though. But I'll deal with that when I get there.

I also started looking at the route to get there and back. Can't do a road trip without getting a few Geocaches. Especially in the counties I still needed. So this morning I woke up early with excitement, grabbed the dogs, and out the door I went!

My first stop was Italy! Well Italy, TX that is. Nearly 2 hours and just over a hundred miles, I figured this virtual cache right off of I-35E would be a good place to walk the dogs too. Unique Italian Architecture (GCC25B) can be viewed from the Interstate while passing by, but then you can't see all the unique buildings. This is a warehouse made to look like a caterpillar, but the company makes dome shaped houses. There's a whole domed house neighborhood right here too. After a few pics and the dogs taking care of business, back on the road again! 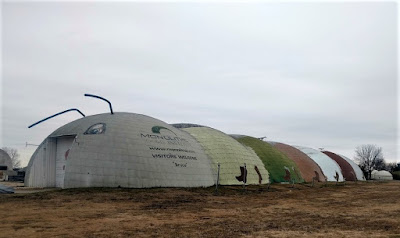 Another two hours and another 120 miles later, I stopped for another quick cache (GC26HV9) right off the exit on I-30 in Sulphur Springs, Texas. This got me a new county, Hopkins County, and the dogs got to do their business as well.

Just 40 miles east on I-30 was Morris County and another quick highway exit cache (GC384YY).

My last Texas stop for today was just 24 miles later in Bowie County at the New Boston Cemetery (GC15NGJ). New Boston was established in 1877 as the result of the railroad being built just four miles to the north of Old Boston in 1876. Didn't spend a lot of time here. Gotta keep moving. 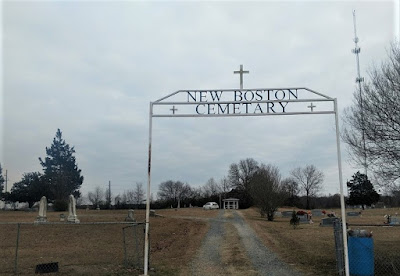 Welcome to Arkansas! Thirty miles later I pull into the Arkansas Welcome Center to grab a cache for Miller County (GC27RNF).

Ten miles later a quick exit park and grab cache (GC4KKN3) near a roadside memorial for three accident fatalities and one for Hempstead County.

Twenty-seven miles after that and I arrive in Nevada County, Arkansas for my next needed county. I chose this cache called The Battle of Gum Grove (GC18ZWR) because it was close to the exit and it had a Civil War history. Officially known as the Battle of Prairie D'Ane (French for Donkey Meadow), it was an open prairie 20 square miles surrounded by dense forest. Having taken place April 9-13, 1864, it was part of the Camden Expedition launched by Union Forces to drive the Confederates down into Texas, which it was unsuccessful in doing so. The cache was placed near an abandoned railroad overpass of I-30 which overlooked the battlefield prairie. Not really much to see related to the battle.

But what I did take a liking to and another reason why I like Geocaching, is finding the old abandoned railroad overpass. I took several different photos and I think I liked these two best and couldn't decide which one to share with you. So I decided to share them both. 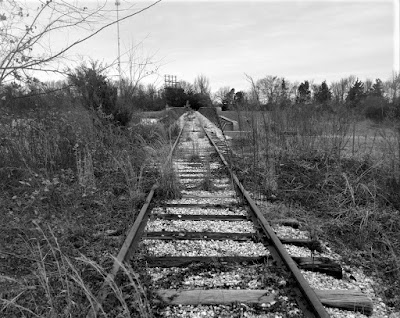 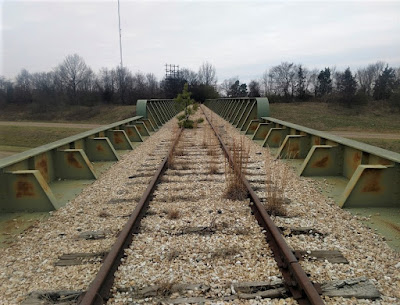 OK, after the dogs and I have checked out the bridge enough, I load them back into the car and we hit the road again.

Compared to these previous short drives, this next one was a long 72 miles down the road. I arrived in Saline County in a town called Benton, Arkansas. The cache itself was fairly easy to find, but it was a Challenge Cache. A Challenge Cache is one that has requirements beyond finding it and signing the logsheet. This particular one is called "5 State in a Day Challenge" (GC5FB8A). I think you can guess as to the requirement needed. Well I met that requirement back nearly two years ago on another road trip: "870 Miles, 6 Geocaches, 5 States, 1 Day", when I found a cache in Texas, Louisiana, Mississippi, Alabama, and Florida all in the same day.

Twenty miles up the road and I'm now in Pulaski County and Little Rock, Arkansas. There's several good Challenge Caches here that I qualify for, but being pressed for time I had to choose just one. I ended up picking the Arkansas Bakers Dozen Challenge cache (GC395QZ) because I also needed its Difficulty/Terrain rating. It had a D/T rating of 5/2.5 of which I used to have a blank space on my grid. To understand the Bakers Dozen requirements, click on the GC# link and there's a detailed breakdown on the requirements.

Another short 20 miles later and I arrive for a quick exit cache (GC7G6CG) in Lonoke County.

I drove another 50 miles before calling it a night and checking into a hotel in Brinkley, Arkansas. A total of 538 miles today with plenty more to go. My wife still has no clue I'm coming. When we talked on the phone a little while ago, I was somewhere down in South Texas geocaching and picking up the needed caches down there. Gonna be a big surprise in Baltimore! Be sure to check back in tomorrow for more...
Posted by Mark at 9:20 PM