SURPRISE!! Despite being sick with a cold, away from home in a strange town, sitting in a hotel, and WAS missing me, my wife was extremely surprised and extremely happy and in disbelief that I just drove 1800 miles to see her and cheer her up. But it was worth it just to see her reaction when she walked down to the lobby and saw me sitting there with the puppies.

In case you missed the beginning: Day #1 or Day #2

So this morning I got up and going before the sunrise in Virginia. Gathered up my stuff, put the GeoDogs in the car, and checked out the hotel. A quick stop at a nearby Geocache (GC1Z0ZC) "Hurricane N Town" because you can't make a stop and not grab at least one cache! Plus it was in Smyth County which is a new county for me. And this early in the morning there were no muggles in sight.

Thirteen miles down I-81 was my next cache "Chev-It" (GCR76N) in Wythe County. It was located at a Shell gas station right off the exit so it was a quick stop for gas and a cache.

On the way to my next stop I gotta nice view of the sunrise. 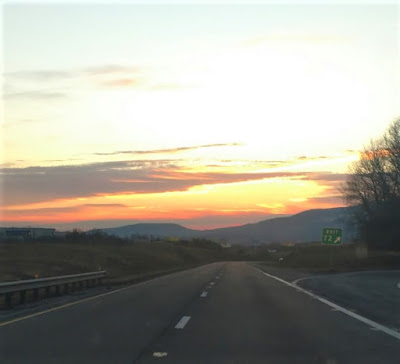 Pulaski County was my next stop at another quick "Under the Old Oak Tree" cache (GC386K7) right on the exit! Gotta keep moving... One thing that's kinda funny. The GeoDog Chihuahua's lay down and nap in the passenger seat as soon as I start driving. Before I even come to a stop, they pop their heads out from under the blanket trying to look around as if they're saying "Are we there yet? Are we there yet?"

Another 40 miles down the road was Roanoke County and the "Hanging Rock Battlefield Trail" cache (GC6DGB0). On June 21, 1864, following two days of fighting at Lynchburg, Confederate General Robert Ransom's cavalry, pursuing Union General David Hunter's retreating column, engaged in a conflict that would ultimately become known as the Battle of Hanging Rock.

Hunter, fearing an assault by the forces of Confederate General Jubal A. Early after the Union defeat at Lynchburg, withdrew toward New Castle. His troops followed the Lynchburg-Salem Turnpike.

Early sent his army in pursuit. He ordered Ransom to lead his cavalry over the Peaks of Otter to Buchanan, then to Salem on the Great Road (modern Route 11).

Hunters retreating forces included a wagon train of ambulances and supply wagons as well as artillery and munitions. The narrow gap between steep rocks between Hanging Rock delayed the column, creating a prime opportunity for Confederate attack. On the morning of June 21, Confederate General John McCausland's cavalry spotted the stalled Union artillery.

Early's infantry had not caught up with Hunter's army, so Ransom sent McCausland with only a portion of his cavalry to strike the Union column. Union guns and wagons sustained heavy damage; wheels were torn away, cannon trunnions broken, and limbers pushed into Mason Creek.

The monument below is a memorial for the battle. Around the corner in the second photo is the "Hanging Rock." Kinda looks like the profile of a grinning ape or a smiling grinch after getting the Christmas spirit. 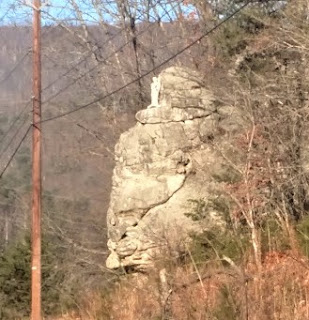 Back on the road for another 55 miles got me to Rockbridge County. What was to be a quick and simple park and grab geocache (GC16Q5V) near the exit, turned out to be a stroll through history. On the hill across the street was a couple of old homes and a church, along with another cache (GC19TXP). One house in particular sits on land that was once occupied by a log cabin. The log cabin was the birthplace of Sam Houston. Born on March 2, 1793, the Houston family moved to Tennessee in 1807. After serving in the U. S. Army during the war of 1812, Houston studied law, was twice elected to the U. S. House of Representatives, and became governor of Tennessee in 1827.

For several years he lived with Cherokee Indians in present-day Oklahoma. He moved to Texas in 1832, led the fight for independence from Mexico, and served two terms as President of the Republic of Texas. He represented Texas in the U. S. Senate from 1845 to 1859. A slave owning Unionist, he was removed as governor of Texas in 1861 after refusing to serve allegiance to the Confederacy. Sam Houston died in 1863.

The house that now stands in place is called Church Hill at Timber Ridge Plantation. It is the private residence of the Thompson family since 1848, and the setting for scenes from the 2001 Warner Brothers, Ted Turner Civil War movie "Gods and Generals". Church Hill is listed on both the Virginia Landmarks Register and the National Register of Historical Places. 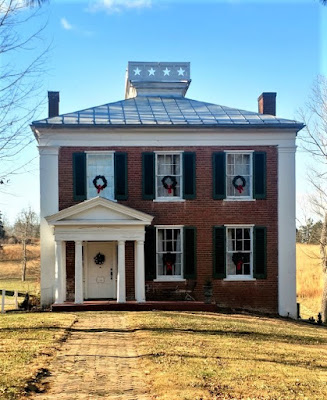 Next door is the Timber Ridge Church. This Presbyterian Church was built in 1756, nineteen years after the first settlement in Rockbridge County. 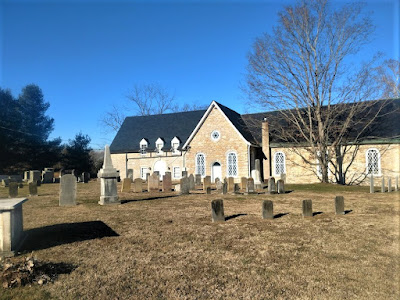 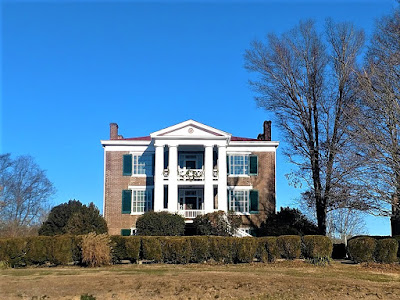 Forty-five miles down the road is a quick park and grab cache (GCTNRX) at a park and ride lot in Rockingham County. Then thirty-four miles later in Shenandoah County for the "Cannonball Run" cache (GC1N7YD). A quick stop near the exit at a shopping center with a couple of cannons. That's one way to deter shop lifters! 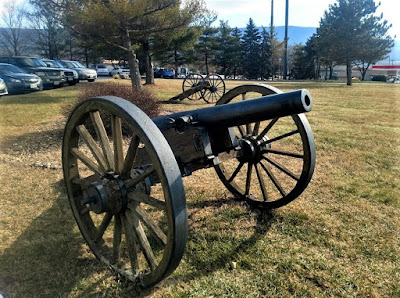 Thirty miles later into Frederick County was the Battle of Cedar Creek (GC4XT74). This is located near the highway exit but at the Winchester-Frederick County Visitors Center. I didn't have time to go inside so I wasn't able to see anything. Hopefully the next time in the area I can check it out.

A short 17 miles down I-66 to Fauquier County to grab a virtual cache (GC2F1F) called "Who Saw It First". I can't say much about it because I'd be giving away the answers. So I'll just leave it at that.

Thirteen miles down and in the same county was another historical cache I wanted to get. "Preserving You Heritage" (GC3AKCG) was a stone meeting house built in 1771. It served as a church until 1809 and then a school until 1909. It was converted to a private residence for a long time and then a video rental store in the 1990's. Now restored, it is the home of the Fauquier Heritage and Preservation Foundation.

The interesting part is the land surrounding the meeting house. It's the site of the original town cemetery. Local writers from the 1800's noted that the school children used to play among the tombstones. While the tombstones were moved to the cemetery outside of town, most of the remains were not! The gravel parking area covers a portion of the original cemetery. Beware of hitchhiking ghosts!

Sixteen miles and in Prince William County, I get to another virtual cache called "Shirley You Jest" (GC874F). Not what you'd expect to see when you go to the shopping center. The small Shirley Family Cemetery is the final resting place of Richard O. (1802-1857) and Susan Shirley (1813-1880) and possibly several of their six children. Richard Shirley owned approximately 400 acres of land near Gainesville. 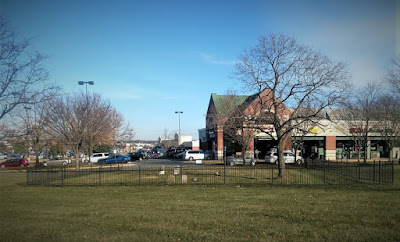 A quick stop in Fairfax County at "Nighty Night" cache (GC2H52A), a loop around the DC Bypass, and another 58 miles to Linthicum Heights, Maryland in Anne Arundel County for another quick cache (GC4FJZH) just outside the hotel. My wife hasn't gotten off work just yet, so I find someplace to grab a bite to eat and let the GeoDogs investigate the snow on the ground.

It wasn't long when I get a text telling me that she's back at the hotel, feeling horribly sick, cold, fever and already got her PJ's on and crawled into bed. Now how can I disturb her and make her go down to the lobby. So I go back to the hotel and take the Chihuahua's inside, one in each arm, and talk to the clerk in the lobby. After explaining that I just drove over 360 miles today and 1800 miles in total to surprise my wife, who's company changed our vacation plans, all I had to do was pay a small pet deposit and we could stay there too. Unlike the answer I got when I called a few days ago.

So I asked them to call her room and tell her that she needed to come down to the lobby to get a package that just arrived for her. Remember she has no clue. When we talked every evening, I always said I was somewhere in Texas driving all over the state Geocaching. That explained why I was in a different hotel each evening too.

From around the corner I hear the elevator doors open and there she is. SURPRISE!! It takes a moment for it to register when she sees me, but then her face lights up! She gets this huge smile on her face. For a few minutes anyway she forgets the fact that she's sick with the flu. Seeing myself and the puppies there in the lobby just made her day. For the rest of the night before she fell asleep from medication, she'd just shake her head when she looked at me in disbelief that I'd drive halfway across the country just to see her. But I just wanted her to know how much I loved her and missed her. And I think from that moment forward, her sneezy cold and stuffy head started to disappear! I LOVE YOU MY SWEET CANDY!!
Posted by Mark at 9:32 PM