Well it started out a sad morning. I had to drop my wife off at the airport this morning in Midland, Texas. She had to take a business trip up to Boston, Massachusetts for a week to train a Director of Therapy at a nursing home there.

So I went geocaching solo today. I didn't go far, just taking the long way and backroads to Monahans. I drove north out of Midland-Odessa on US-385 to grab my first cache at a picnic area (GC2KBRC). It would have been a quick park and grab, but there was this old wind mill there with this hawk or falcon sitting up on it. I probably spent about 15 minutes trying to get a decent picture. But you can only do so much with an old phone camera. I couldn't really get a closeup shot of the bird itself. It just made me miss my old Nikon. Gotta get a new camera one of these days. 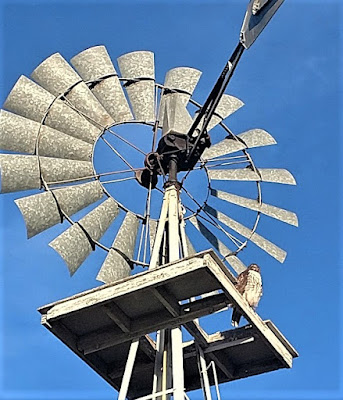 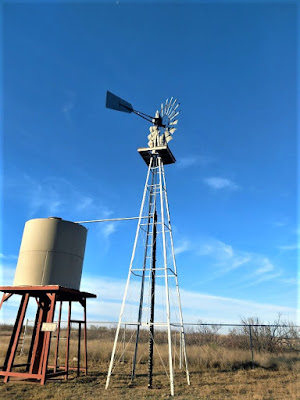 Finally I decided enough photos have been attempted and continued north a few more miles. I arrived at a geocache called November 24 (GC3B1RT). It is one of a series of Power Run caches scattered about Midland and Odessa named for each day of the year. Along this stretch of road, I managed to get another 19 of 22 of the calendar dates. There were three along this road that I could not find.

Looping back around to the south on Farm Road 181 and about 4 miles west of Goldsmith, I came to this intersection. On the one side out in the fields are these old buildings. Couple houses maybe? I'm not sure. I couldn't find any information on them. If you know what they were, please comments below. On the other corner is an active business. The Pioneer Cafe looks to be a combination cafe and convenience store. Though it was closed today so I'm not sure. 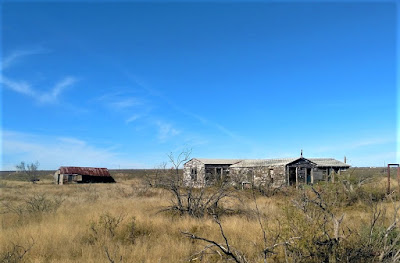 So I made my way back to Monahans and stopped by the Monahans Cemetery. I hid a cache there last year (GC6X29H). It had gone missing so I made a new one and replaced it today.

Instead of going home, I decided to continue heading west. There was a new cache listed in Pecos and the FTF (First to Find) was still up for grabs. Instead of jumping back onto I-20 so quickly, I decided to take the Old US-80/TX-57 highway westbound for the scenic drive and to see what's there. It goes through Thortonville, then Wickett, and into Pyote. Just before you get into Pyote on the east side of town was this small cemetery. There wasn't a cache here but I checked it out anyway. Hmmm I don't have a cache container with me so I'll have to bring one back and hide it here. 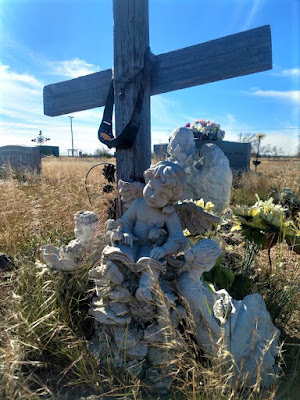 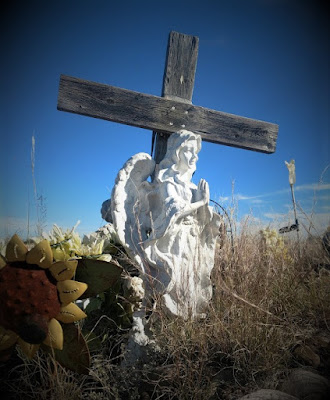 Continuing on into Pecos, I arrived at the roadside picnic area north of town where the cache (GC7FVHA) is supposed to be hidden. Looked and looked where the coordinates lead me to but no luck. Then I spend another 20-30 minutes looking based on the cache name and hint. Nope! Finally after about an hour I give up and log a DNF. Maybe next time.

Well while I'm here, I might as well get a couple others in town. This next cache (GC6XM70) was outside a restaurant. Fortunately small town Texas means closed on a late Sunday afternoon. So no muggles made it easier to find.

Another stop by the cemetery here on the south side of town without a cache. This one was kinda divided into three sections. The main cemetery which was neat, orderly, and lined up like you would expect a cemetery to be. Another section which was also normal. But in between the two was a spare section with a few scattered headstones from the 1800's. Some out in the open and near the dirt drive path that could be easily driven over if you weren't paying attention. Either way, another spot to hide a cache at soon! 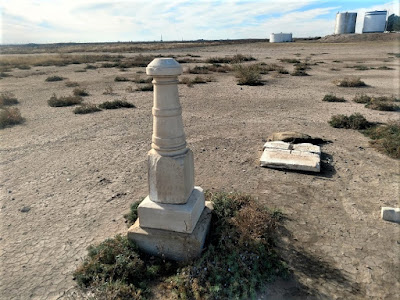 Well that's it for now. Back to the lonely apartment without my better half. Well me and the Chihuahuas anyway. Until next time...
Posted by Mark at 9:29 PM