As you recall from yesterdays blog, I had just arrived in Baltimore to surprise my wife who had gotten sick since she arrived a few days ago. This morning she felt slightly better. I think it was the fact of my showing up which cheered her up. Despite the below freezing temperatures outside, she didn't want to be sitting around inside the hotel all day long. So we decided to take a drive down to Washington D.C. for as long as she could stand it.

Our first stop was a Starbucks around the corner from the hotel to grab a nice hot cup of coffee. Followed by about an hour drive as we made our way into DC and found parking near the water at the Tide Basin Parking Area just south of the Washington Monument. 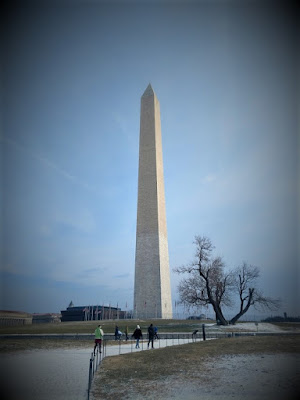 We walked across the lawn and up the hill. The Washington National Monument Society was founded on September 26, 1833 by Chief Justice John Marshall to raise private funds to erect an obelisk. It wasn't until July 4th, 1848 before the first cornerstone was laid. A zinc case filled with a copy of the Declaration of Independence, the Constitution, coins, newspapers, and mementos was places inside the 24,500 pound marble cornerstone.

By the Fall of 1854, the Society had exhausted all of its funds for the project and only completed 152 feet in height. Finally on August 2, 1876, Congress appropriates $2 Million for the completion of the Washington Monument. A second cornerstone is set on August 7, 1880 at the 150 foot level, marking the resumption of the shaft. Finally on December 6, 1884, the capstone and aluminum point are set in place marking the completion of the Washington Monument, thirty-six years after it began. Dedication ceremonies were held on February 21, 1885. 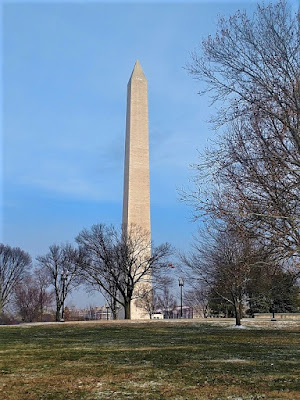 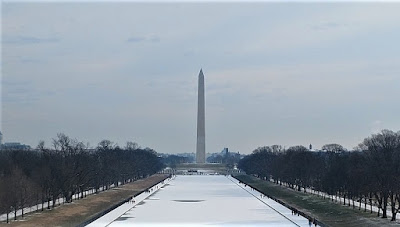 Walking down towards the reflecting pool, we arrive at the National World War II Memorial and grabbed a virtual cache (GC7B6JK). The WWII Memorial opened on April 29, 2004, with a dedication ceremony on May 29, 2004 for a 4-day "grand reunion" of veterans on the National Mall.

Twenty-four bronze bas-relief panels line the entrance and tell the story of America's experience in the war. Granite columns representing each U.S. State and Territory at the time circle a pool and fountain, though with the below freezing temps it was drained and off. Two massive victory pavilions represent both the Atlantic and Pacific campaigns. And a wall of 4,048 gold stars to remind us of the over 400,000 Americans who sacrificed their lives for Freedom. Of course when you're visiting you just have to get the pic next to your home state! 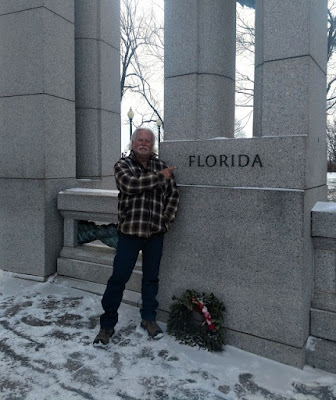 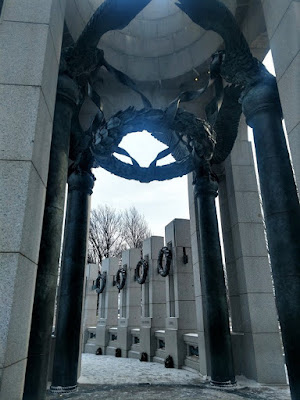 Now on our way towards the Lincoln Memorial and another virtual cache (GCEB2). You can see in the photo that the reflecting pool had been drained and was now a thin layer of ice covered with snow.

In March of 1867, just two years after Lincoln's assassination, Congress incorporated the Lincoln Memorial Association to build a memorial to the slain 16th President. Modeled after the Parthenon in Greece, architect Henry Bacon felt that a memorial to a man who defended democracy should echo the birthplace of democracy. Ground was broken for the foundation on February 12, 1914. The memorial is surrounded by 36 columns, one for each state in the union at the time of Lincoln's death. Above the colonnade inscribed on the frieze are the names of the 36 states and the date they entered into the union.

From the chamber of the memorial, one can appreciate the different stones used in its construction. The terrace walls and lower steps comprise granite blocks from Massachusetts - the upper steps, outside facade, and columns contain marble blocks from Colorado - the interior walls and columns are Indiana limestone - the floor is pink Tennessee marble - the ceiling tiles are Alabama marble – and the Lincoln statue comprises 28 pieces of Georgia marble. These building materials may seem random, but Henry Bacon specifically chose each one to tell a very specific story. A country torn apart by war can come together, not only to build something beautiful, but also explain the reunification of the states. The Lincoln Memorial was dedicated on May 30, 1922. 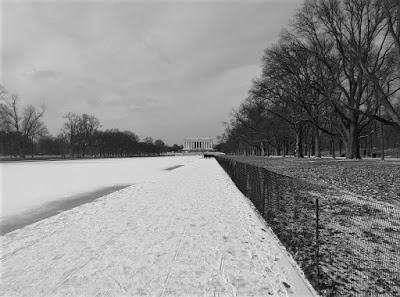 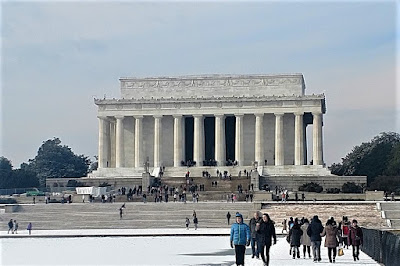 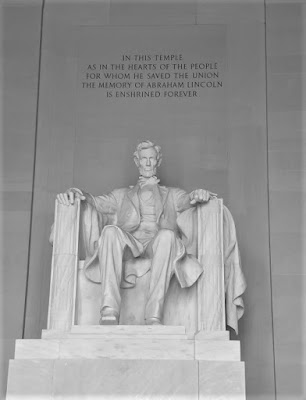 On the way back, we stopped by the Korean War Veterans Memorial and our 3rd virtual cache (GC2657). The memorial was designed and financed by private contributions and erected under the direction of the Korean War Veterans Memorial Advisory Board composed of Korean War veterans appointed by President Reagan. Dedicated on July 27, 1995, the memorial consists of four parts: the 19 stainless steal statues, the Mural Wall, the Pool of Remembrance, and the United Nations Wall. 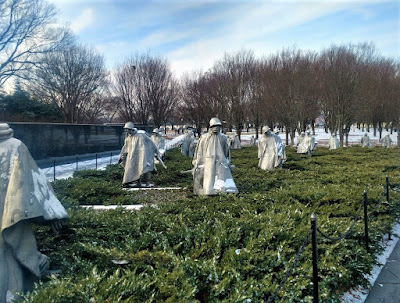 Next up was the D.C. War Memorial. The first plans were submitted to the memorial commission in 1919 and became reality with the passage of Resolution 28 in 1924.  The 499 names of the men and women from the District of Columbia who gave their lives in World War I are inscribed as a perpetual record of their patriotic service to their country.

A circular, open-air, Doric structure built almost entirely of Vermont marble, the memorial has an overall height of 47 feet and a diameter of 44 feet, large enough to accommodate the entire U.S. Marine Band. It was intended that the structure be a memorial and a bandstand and that each concert would be a tribute to those who served and sacrificed in the war. Construction was completed in 1931 and the memorial was dedicated by President Herbert Hoover on the national observance of Armistice Day, November 11, 1931, "13 years to the day and to the house the armistice took effect." 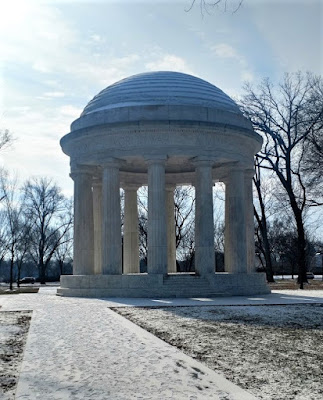 This next item is probably overlooked by most everyone who visits the monuments here in Washington D.C. I know I would have walked by it with only a thought of that it looks like an over-sized fancy fire hydrant. Thankfully being a Geocacher, this was highlighted and made into a virtual geocache. The Japanese Stone Lantern (GCF2A6) continued the gift giving cycle that began in 1912 with Japan's donation of the famous cherry trees.

Presented to the city of Washington on March 30, 1954, this stone lantern symbolizes the enduring cultural partnership that re-emerged between Japan and the United States after World War II. The lantern is one of two, memorializing Tokugawa Iemitsu, the third shogun, or military lord, of the Tokugawa Dynasty, under his posthumous name Daiyuinden. Carved in 1651, it stood for over 300 years on the grounds of the Toeizan Kan’eiji Temple which contained the remains of the Tokugawa Shoguns. The temple was located in the ancient city of Edo, present - day Tokyo, in Ueno Park, a place famous for its cherry blossoms. Its mate stands there to this day. 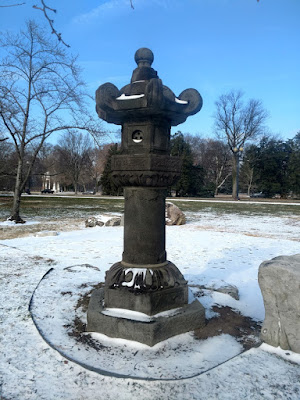 The view across the Tidal Basin sits the Jefferson Memorial. In June of 1934, Congress approved the Thomas Jefferson Memorial Commission to direct the erection of a memorial to the 3rd President. Modeled after the Pantheon of Rome, it follows the style of Jefferson's two most famous buildings; Monticello and the University of Virginia Rotunda. FDR laid the cornerstone on November 15, 1939. The dedication was held on April 13, 1943, Jefferson's 200th birthday. Because construction took place in the midst of WWII, the original statue of Jefferson was made of plaster because of the restrictions placed on certain metals needed for the war effort. A 19 foot bronze statue replaced the original plaster one in 1947. 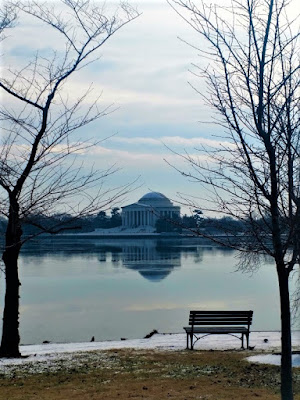 That's about all Candy could handle of the freezing temperatures. I'm surprised she made it this long as sick as she was. Fortunately after the two hour walk, we're back at the car AND a heater! A few minutes later and we're warming up and thawing out. Halfway back to the hotel we spot an Olive Garden and decide on some HOT soup and a salad. We spend the remainder of the day staying warm in the hotel, give her some cold and flu medication, and getting some rest. I gotta start my long drive back to Texas in the morning. Thanks for stopping by and following along. Hopefully you kept warm. 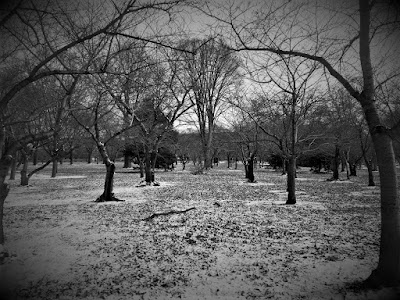