Hello again and welcome to another 360+/- mile Sunday Geocaching drive from Killeen to Monahans, Texas. There are multiple routes to take and I will probably be taking most of them over the next few months as I find all the available geocaches. So I hope you'll come back to follow along as I visit a lot of ghost towns, cemeteries, Texas history, and just ordinary roadside geocaches. And just a reminder to like our new Facebook page at https://www.facebook.com/AwayWeGoUS to stay up to date with any new posts. 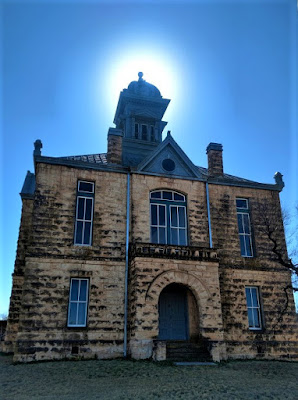 My first geocache (GC2C3WW) was just several miles away in Copperas Cove, the next town over. Since I'll be making this long drive every weekend for a while, I'm gonna try to grab a cache near to each end. This will help to increase one of my favorite stats: cache-to-cache distance. This stat measures the straight line distance from each found cache in the order that you found them. I started caching back in 2006. From 2007 through 2010, I was an over-the-road truck driver. Caching along the way, I racked up miles quickly that way. I currently have nearly half a million cache-to-cache distance miles. So let's continue rolling!

My next cache was called "Almost There" (GC363HY) located just off US-190 near Rochelle. A quick park-n-grab and I'm on my way.

Over and through San Angelo, I take US-67 south (west). Taking one of the side roads for a short detour, I stopped for the "Don't Get Stuck" geocache (GC11J83). A fairly easy cache to find right along the road. But it hasn't been found in nearly 4 years! So it felt pretty good to have found a lonely cache and still in good shape. 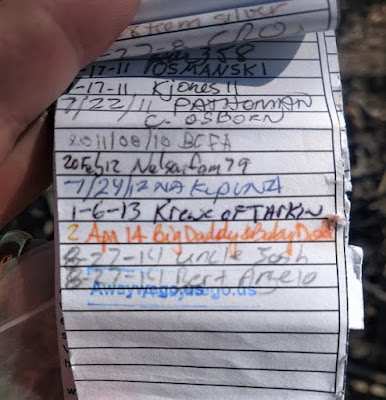 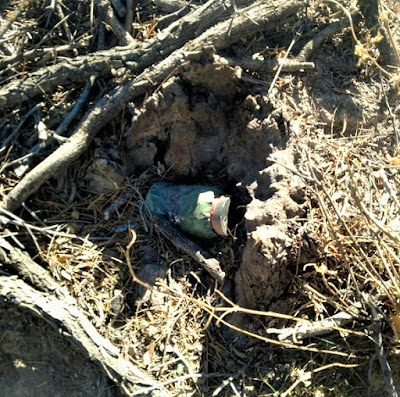 Another side street geocache a few more miles down was the "Big Rock w/Bonus" geocache (GCMF26). This cache was first hidden way back in 2005, thirteen years ago! So the "Bonus" were the coordinates to a puzzle geocache just to the south. So after finding the "Big Rock", I found the puzzle cache called "Foster" (GCMF2D).

Getting back to US-67, but not very far, I arrived at "TGT: Tankersley" (GC15Y5B). Tankersley (Tankersly), also known as MacGrath, was named for Richard Franklin Tankersley, husband of Annie Ellen Allen Tankersley, one of the first white settlers on the Concho River in 1864 and donor of land for the townsite. A post office, established in 1910 as Tankersly, was discontinued in 1963. In 1914 the community had a population of forty, a general store, and two grocers. The local school had eighty-three pupils and three teachers in 1933. The population reached a high of seventy-five in 1946, when Tankersley had three businesses, but by 1953 the community had twenty residents and one business. In the 1980's a cemetery, the Tankersly–Twin Mountain school, the abandoned railroad station, and the West Texas Boys Ranch remained in the area. The estimated population of the community was twenty in 1990. No population estimates were available in 2000.

Close by to Tankersly was "TGT: Hughes" (GC15T5E). Hughes, between Spring Creek and the Middle Concho River in east central Irion County, was named after Duwain E. Hughes, on whose ranch the settlement was located. The Hughes community was receiving its mail from Tankersley in Tom Green County in the early 1950s; the townsite was not shown on later maps.

I didn't see anything to take a photo of near these two caches.

Crossing over into Irion County I arrived in the community of Sherwood. There are three caches here in town. The first geocache was at the Sherwood Cemetery (GC113GK). The oldest dated internment here is Infant Daughter Hodge in 1865. There are also several here that perished in the flood of 1882. 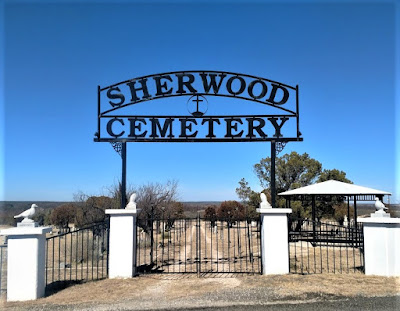 Next up was the beautiful former Sherwood Courthouse (GCM4G3). See photo at top of this page and below. The first permanent courthouse for Irion County, Texas, locally organized in 1889. Replaced temporary housing in several buildings. Site was gift of Mr. and Mrs. Frank Ripley. Contractors Martin and Moody; stone was quarried nearby. Courthouse was used for dances, teachers institutes, community events, and the lawn for summer socials.

In a familiar case of death-by-railroad, Mertzon became the county seat in 1936 and this small town was finished. This was merely a technicality since Sherwood had all but been abandoned when the railroad by-passed it by two miles in 1910. The now privately owned courthouse is available for special events and festivals. The clock faces had painted hands. The hands reportedly indicate the moment of Abraham Lincoln's death.

After spending about 15-20 minutes of looking where there just weren't a whole lot of places to hide it, I did not find the cache. I do not like to, but I had to log a DNF on this geocache. 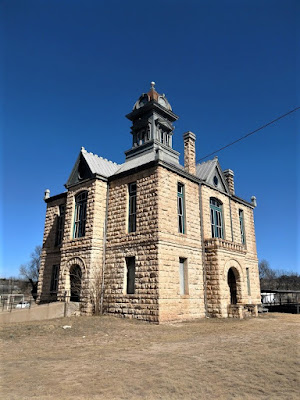 The last cache in town for me to find is another one of those "would never have seen if it weren't for geocaching" places! This dugout type home was once "The Old Scout House" (GC7DXBM). I couldn't find any information on it other than what's listed on the geocaching page that it was once a cub scout meeting house. Don't know any dates for it. But it does look like it would have been a cool place. After taking a lot of photos and looking into all the cracks and crevasses, I could not find a cache. Ughh! Two DNF's in a row! Not a good sign. 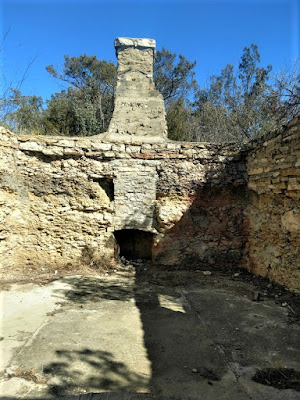 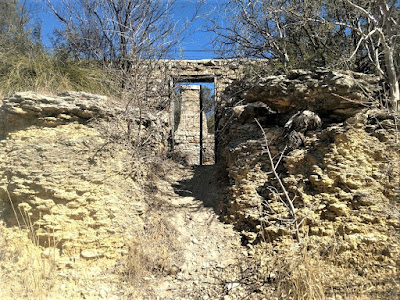 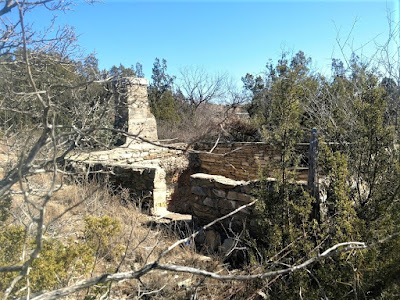 Continuing westbound on US-67, I arrive in the town of Rankin. Established in 1911, Rankin is the oldest town in Upton County and named after rancher F. E. Rankin. The first of two caches in town was "Sitting on a Hilltop" (GC2YC10). Located near the Rankin Park Building and gave you great views of the town.

Next on the north side of town was "Rodeo Kids" (GC3W3NM). Since 1952, the community of Rankin has annually hosted an all-Kid Rodeo. An event unique to the sport, which has it's roots in the American cattle industry. Ranching has been the backbone of the Rankin economy sine the town's establishment in 1911. Many of the cowboys and ranchers in Rankin participated in rodeos, while other individuals from outside the area came here roping events. The competitors often brought their children, many of whom practiced events and wanted an outlet for their skills.

In 1952, professional roper Walton Poage, along with his son and his son's friend, enlisted help from residents in Rankin in creating an all-kid rodeo. The community came together to support the idea and the first all-kid rodeo was held that year in two go-rounds of calf roping, ribbon roping, goat roping, steer riding, and a barrel race and boot scramble. The entry fee for each event was $1.00 and prizes were donated by local businesses and residents. By the next year, the Upton county 4-H club began to sponsor the rodeo. The event grew in popularity, and in 1954, approximately 1,500 to 2,000 individuals attended each night of the event.

Since its inception, the all-kid rodeo has been held every year. It brings commerce into Rankin, drawing in visitors and competitors, many of whom later became members of the professional rodeo cowboys association. It was the first rodeo contest for many boys and girls, and helped them get a start in the sport. Today, the all-kid rodeo continues to be a unique tradition promoting the ranching and family spirit of the Rankin community.

That's all for today. I take the final leg home to Monahans where I can grab a bite to eat and relax. Until next week...
Posted by Mark at 12:20 PM