My AwayWeGo Geocaching Adventure for another 360+ Sunday drive from Killeen to Monahans, Texas, has me visiting the Lampasas cemetery, a courthouse, and some other roadside geocaches. Before I get started, a reminder that you can now subscribe to the blog using the buttons on the right side column. Or follow me on my Facebook Page to keep updated with new blogs and other photos not in the blogs.

The first geocache was "A Dollar for a quick fix" (GC3PHKR). A simple urban LPC right there in Killeen to boost my cache distance stats.

Now off to Lampasas and the Oak Hill Cemetery that has three geocaches (GC15HQG, GC17WD6, GC17WGT). From the historical marker: Hartwell Fountain sold ten acres of land to the city of Lampasas in 1872 to establish this cemetery. Originally known as City Cemetery. It was renamed Oak Hill Cemetery in 1908. The Ladies Cemetery Association, A group of concerned Lampasas women, maintained the cemetery from 1891 to 1948, when the city assumed responsibility. Among those buried here are local pioneers, prominent business people, veterans of wars including the Texas Revolution and the Civil War, and their descendants.

It's a huge cemetery with over 7,000 internments making it the largest and one of the oldest in the county. These are just a couple of the beautiful large statues and tombs. 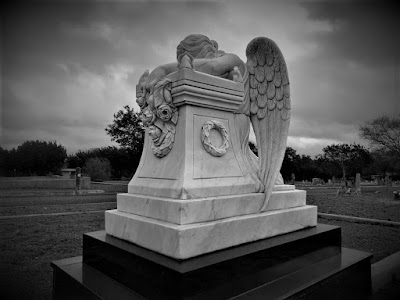 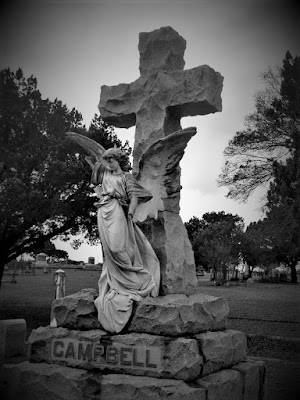 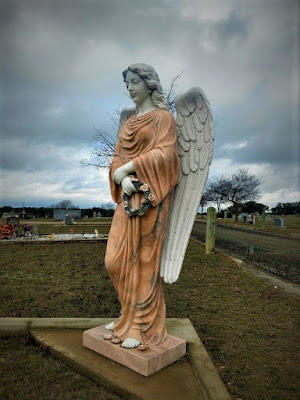 One of the notable buried here is James Jackson Beeman (Dec 21, 1816 - Dec 7, 1888). He was one of the first settlers in Dallas and Weatherford. Born in Madison County, Illinois; came to Texas in 1840. He helped cut the first road in Trinity Bottoms, named Turtle Creek (1841), and plat the city of Dallas in 1842. He guided Texas President Sam Houston to Indian Parley in 1843; Joined California Gold Rush in 1849; pioneered Parker County in 1854; and aided in the rescue of Comanche captive Cynthia Ann Parker in 1860. Returned to Dallas to live in 1864 and died in Lampasas in 1888. 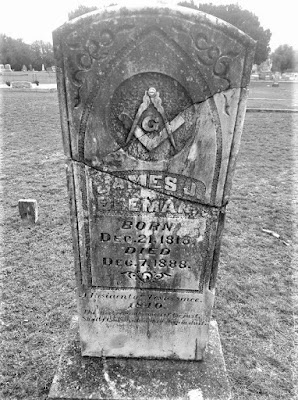 After nearly an hour wondering the cemetery looking at headstones, I was one my way. Stopped briefly at a roadside geocache called "I wish I would have listened" (GC24X6Y).

Then passing through the small town of Rochelle, I went over to the cemetery. However there were some muggles (non-cachers) visiting. There wasn't a geocache there so I just did a quick drive through to look at hiding place possibilities before leaving. Driving by the school getting back to US-190, I saw the sign that clearly explains how rural Texans deal with those who have bad intentions. 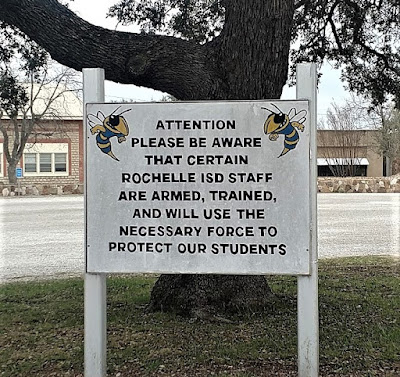 Upon arriving in San Angelo, I decided to stop for a Starbucks coffee. Around the corner I figured I'd grab a quick geocache at a Chinese restaurant. The cache was called "Dog" (GC728PN). It is named for a symbol on the Chinese Zodiac, NOT a menu item. I spent about 15 minutes looking in some bushes at the corner of the parking lot near the road. I hate shrub hunts. Probably my least favorite, especially along a busy street. Making it worse was that I couldn't find it. So a DNF for today.

Next up was the town of Mertzon in Irion County. The geocache was located out front of the Irion County Courthouse (GC167F1). Now I think I've read somewhere that this was voted as the ugliest County Courthouse in Texas, but don't hold me to it. Compared to the previous courthouse over in Sherwood, this one is pretty boring. But that's the way it goes when the railroad decides to stop in one town over the other. 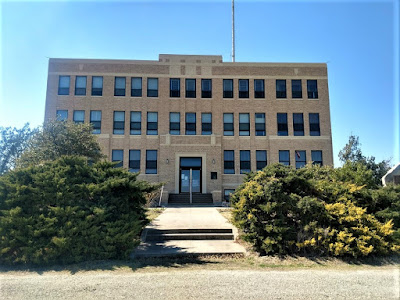 One quick final roadside geocache stop at "17thBava3" (GC3M804) for mileage just past Crane and finishing up back in Monahans. That's it for today. Thank you for riding along. Hope to see you back again soon.
Posted by Mark at 6:06 PM