So on today's 360+ mile drive from Killeen to West Texas, I visit a few cemeteries, a couple of ghost towns, two old school buildings, I spot an old Jeep rusting away, and I get a First-to-Find! So let's get started... 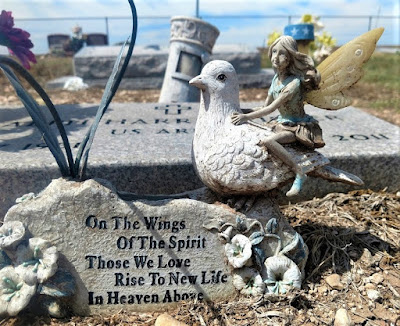 Driving westbound on US-190 into San Saba County, my first geocache was a quick roadside stop called "Me and My JJ" (GC28F72). Soon after that was a "Westbound Picnic Cache" (GC28RQF) at a roadside picnic area. Comanches used to use the hill location of the picnic area for smoke signals to communicate long distance in the pre-settlement times up until the 1870's.

Entering the town of San Sabo, I turn into the Mill Pond Park and head towards the "Armadillo Travel Bug Hotel" (GC6Y53J). A travel bug hotel is just a geocache big enough to hold travel bugs. Some cachers create very elaborate "hotels" that look like actual hotels inside which are really cool. This particular one was just a larger sized container. Oh, and for those new to geocaching, a travel bug is an item with a trackable number on it. The purpose is to retrieve and place from cache to cache so the sender can follow its travels.

My next geocache is located on the north side of town in the San Saba Cemetery and is called "Edge of Eternity" (GC7284N). From the historical marker: San Saba Cemetery, previously the Odd Fellows Cemetery, is located on 17 acres of land about 800 yards north of old town San Saba. On April 18, 1883, the San Saba Chapter of the Independent Order of Odd Fellows (IOOF) purchased 10 acres of this land from JJ Stockbridge to establish a cemetery, which they maintained for 45 years. On April 3, 1929, the newly incorporated San Saba Cemetery Association purchased the cemetery for $1.00 and an additional 7 acres from Mrs. May Holman also for $1.00. In 1935 burials from San Saba's earliest city cemetery, now Rogan Field, were reinterred here. The cemetery reflects San Saba's earliest times and is a continuing record of the lives and culture of its changing people. (2008) 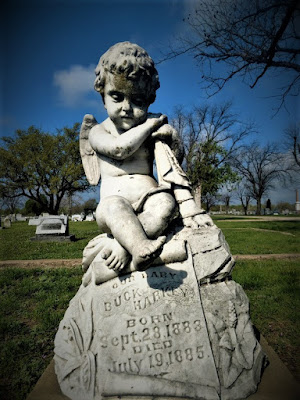 Continuing westbound on US-190, I entered the town of Richland Springs. Jackson J. Brown and his family settled near the springs on Richland Creek in December 1854. The Brown School was constructed in 1868 and named for the neighborhood's original settler. The area attracted settlers through the 1870's, and in 1877 a Richland Springs post office opened in the store of Samuel E. Hays. By 1890 local production of cotton, grains, and livestock supported a settlement of 150 residents, including a justice of the peace precinct, a constabulary, and several commercial and craft businesses. A local newspaper, the Eye-Witness, began publication in 1905. Not long after, the First State Bank was organized, and in 1911 completion of a trunk line for the Gulf, Colorado and Santa Fe Railway linked the town with the main line between Galveston and Amarillo. Richland Springs incorporated in 1932. With a population nearing 500 and as many as forty businesses, the town prospered until the onset of the Great Depression. A three-year drought in the mid-1950's crippled the local economy again. The town's only bank failed, and within a decade its residential and business populations had fallen by nearly half.

Anna B. Davenport (9/18/1882 -- 11/24/1882), was the first person buried here at the Richland Springs Cemetery. To help you find her gravesite look for a historical marker by her headstone. There are over 2200 internments here. And there was one that kinda stood out from the rest and the reason I placed the geocache there (GC7M2M5). John Henry Hart (1873-1946) and his wife Katy Abbie Hart (1877-1956) have a rather unique border surrounding their family plots. And I just happened to have a container that blends in perfectly. 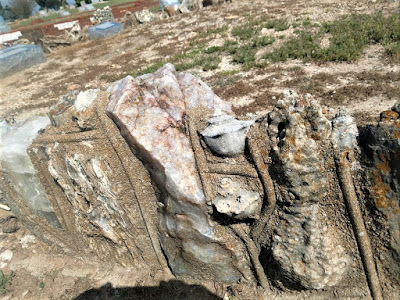 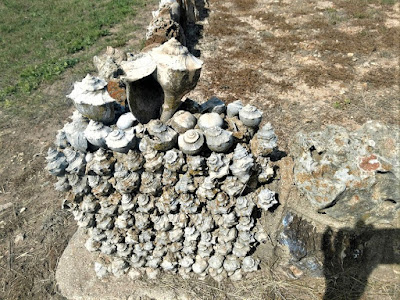 The next little town down the road was Rochelle. Even though there wasn't a cache here, I stopped by the cemetery anyway. From the Historical Marker: E. E. Willoughby (1853-1935), a cattleman from Tarrant County, moved to Rochelle (then about 1.5 miles SE) in 1883. He acquired land here in 1886 along the Brady-San Saba Road. In 1889 he donated two acres near this site for the community's school and church building, moved here from its original 1886 site about 1 mile south. When Willoughby's 19-month old son Ernest Eckie died in 1894, he buried the infant near the school. In 1896, Willoughby deeded one acre here as the cemetery. A new school was built here in 1899.

The community and schoolhouse were moved in 1903 about 2 miles northwest to the new Fort Worth & Rio Grande Railroad. This cemetery continued to serve the new community, first named Crothers but soon renamed Rochelle. The tombstones here of Rev. and Mrs C. W. Jones indicate that she died in Crothers (1906) and he died in Rochelle (1910), though they both died at their home in the same town. Willoughby deeded another acre to this cemetery in 1910, but he was ultimately buried in Brady at Live Oak Cemetery. The rock fence here was built in 1935, and four more acres were purchased in 1943. The cemetery contains almost 500 graves, of which 105 are unmarked. An association founded in 1972 cares for the grounds. 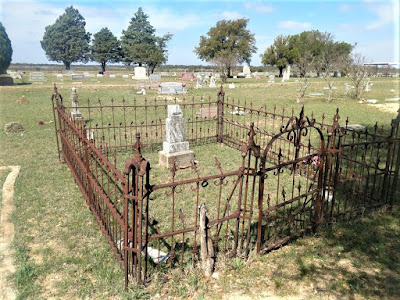 Continuing west on US-87 closer to San Angelo, I come to the ghost town of Vick, TX (GC18HAF). Vick is at the junction of Farm Road 381 and U.S. Highway 87, four miles south of Eola in west central Concho County. In 1963 the community had a post office, a motel, and two other businesses. A 1984 map showed a cluster of buildings at the site. In 2000 the population was twenty. Now only a few homes remain and the ruins of numerous buildings. The old gas station has been turned into a private home.

Driving a few miles north to Eola was my next geocaches. The community has had a post office since 1901, when it was known as Jordan. In 1902 the name was changed to Eola, reportedly after a small local creek named for Aeolus, Greek god of the winds. In the middle to late 1890's public school lands in the county were put up for sale at fifty cents an acre. Spurred on by railroad promotion, a land boom resulted in the area of Lipan Flat, a section that stretched east from San Angelo to the Colorado River. Eola was one of the communities created during this boom, which included many immigrants from central and eastern Europe. In 1920 more than 100 people in the vicinity of Eola were reported to be of Czech descent. The first family to settle in the area was that of Asher L. and Lizzie Leona (Hollman) Lollar, who established themselves at a site 3½ miles southeast of Eola in 1898. Both Asher and Lizzie are buried in the Eola Cemetery (GC18H8M).

Scrolling through the Find-A-Grave website to see what the oldest grave may be at the cemetery, I found something odd. There was a listing for a Lydia Lillath White 1806-1807, long before the Lollars arrived. Looking closely at the headstone, it looks like the engraver flipped the number "9" around for the day and year. That confused the person entering it into the website. But based on the history of the community and the other graves listed, I'd say the first buried there in the cemetery was M M Schooler in 1902. 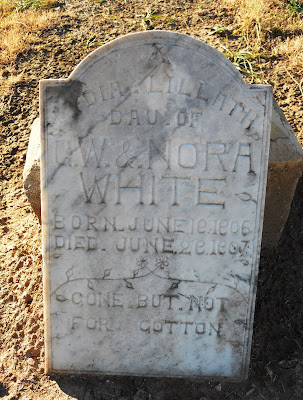 By 1902, when the first local store was built, the community numbered four families. Within the next two years a Baptist church was erected. The first school was conducted in a church on the Will Stephenson ranch. A two-story, two-room schoolhouse was built in 1906. In 1908 the community had a windmill and an Odd Fellows lodge. By 1914 Eola had a drugstore, a general store, and a population of twenty-five. In 1940 the community had a population of 250. A nine-teacher school taught elementary and high school classes. The school has long been closed. There is a geocache there though (GC11BBQ). According to the TexasEscapes website, the school building has been purchased and the new owner is slowly restoring it. The original school is the white building and now contains a restaurant and micro-brewery. The brick section was added in the 1930's along with the gym which is on the backside. You can see the domed top sticking up from behind. 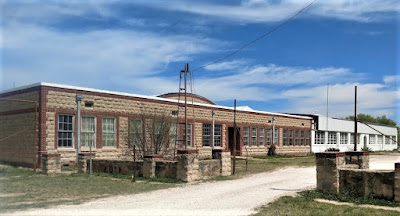 Between Eola and San Angelo I arrive at another old schoolhouse and my next geocache (GC1CHVX). The cache page or any research I've done in preparing for this blog has given me any information on this old school. Some of the possibilities is that the town of Wall, TX, a few miles to the south, used to be called "Lipan School" and then "Little School." Perhaps from that pre-1906 era? 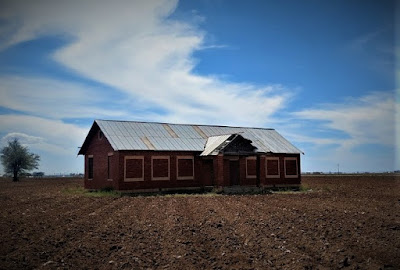 Having passed through San Angelo and still on US-87, I arrived in Sterling City. I remembered a new geocache published there a few days earlier and had yet to be found. So I dropped down Hwy 163 for "overlooking Sterling City" (GC7KR29) to find a nice blank logsheet! WOHOO!! Always good to get those First-to-Finds!

Down the road in Garden City I found a few more caches. The first one wasn't all that exciting except for the finding another cache is always a good thing. But what I found next to it was more interesting. The "Butane4Life" (GC3AJ2N) geocache is a quick roadside cache hidden near a huge butane storage container. But off to the side of where it sits are some old abandoned tanks and other equipment. And then there this old Jeep just rusting away. Oh if I only had the time and money to do something with it, I'd be tracking down the owner to see if they'd sell it! 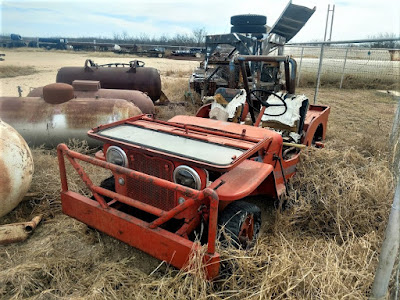 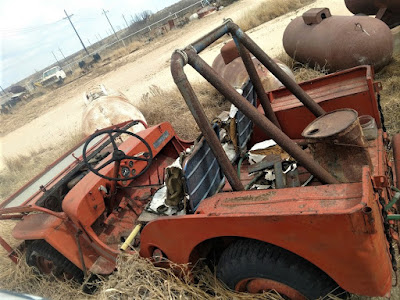 After a quick stop by the Glasscock County Courthouse cache (GC17W82), I proceeded south of town to the "Graves Graves" cache (GC1PEVW) at the Garden City Cemetery. From the historical marker: The Garden City community has been using this burial ground as early as 1886. That year, a child of county commissioner Sullivan Hill and his wife, Lucy, was buried here. Four years later, a sibling was buried at the same spot; the two graves share a single stone.

The Hill family plot, where Sullivan and Lucy are also buried, is one of many in the cemetery representing the early area settlers. Other early family names found throughout the burial ground are Hanson, Gooch, and Cox. Family plots are typically bordered by concrete curbing. Most gravestones are vertical, especially in the older section of the cemetery, which is indicated by the remaining decorative iron fencing. Some of the individual family plots also include original fencing.

In 1914, John Etheridge and Perneice Gore Lawler formally designated the originated one acre tract as a cemetery. Today, the county maintains the burial ground, to which three acres were later added. As the final resting place of many of the early settlers and their descendants, the cemetery is a significant link to community's history. 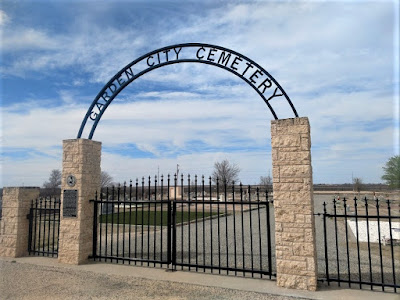 Already late in the afternoon, I had to get moving. I've still got an hour and a half drive ahead of me AND also need to stop by Walmart and get some groceries. So that's it for now. I hope you enjoyed todays adventure and learned some history. See you next week for more.
Posted by Mark at 7:20 PM