2018-02-25: Geocaching Through Texas Cemeteries and History

Today's another Sunday which means another 360+ mile Sunday drive from Killeen to Monahans, Texas. Not a whole lot today. Just five geocaching finds and one hide. But some interesting history. So have a seat on this cool bench that I saw today and ride along with me. 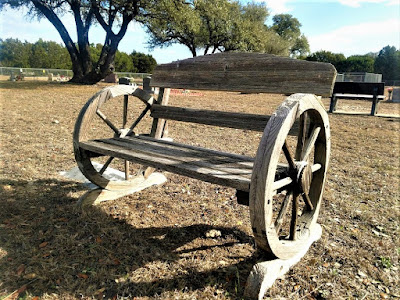 My first geocache was called "Back At The Barnyard" (GC3FY0R). It was a quick roadside cache on a side street in Kempner. Going beyond that just up the road was the Kempner Cemetery. It didn't have a geocache hidden there, so I hid one myself: GC7JTPF. The town of Kempner moved a number of times during its early years of development. It was first settled in the early 1850’s, when a number of families named Pickett moved to the area, which became known as Pickett Valley. The community was also briefly known as Brummersville during 1865. Around 1854 Dan W. Taylor moved to the area with a large herd of cattle and built a store for his men on Taylor Creek, two miles from the present town site. A post office named Taylor’s Creek was established in his store in 1873.

The area was rowdy and lawless in its early days. There was considerable Indian trouble. Taylor asked Governor F.R. Lubbock for ammunition to help the settlers hold their own against the Comanche, but Lubbock wrote back that he and his neighbors should contact a man named Mr. Foster in Burnet for their gunpowder. As if that wasn’t bad enough, several stagecoach and mail robberies occurred between Taylor’s Creek and Belton. After Taylor’s death, the state sent Texas Rangers to the area. The crimes changed from Indian raids and stagecoach robberies to more common acts of the day: unlawful card playing, dogging hogs, maliciously killing dogs, disturbing the peace by using unbecoming or vulgar language in public places, such as the post office and churches, the unlawful carrying of pistols and fighting.

After Mr. Taylor’s death the community was named after a local landowner named Phillip Slaughter. The Taylor’s Creek post office was discontinued in 1878, and that same year a post office named Slaughtersville was established. In 1882 the Gulf, Colorado and Santa Fe Railway was built through the area, two miles from the Taylor store, and the community’s center finally became fixed when the post office was moved to a frame building near the railroad tracks and renamed Kempner after Harris Kempner, a Galveston merchant and director of the Gulf, Colorado and Santa Fe. The coming of the railroad caused the population to double. By 1884 Kempner had two steam gristmills and cotton gins, a church, a district school, and telegraph service, and by 1896 a hotel had been built. Telephone service was available by 1914.

The photo below is the grave site of George Waters who died January 26, 1882, at age 26. He was the first to be buried in the Kempner Cemetery. 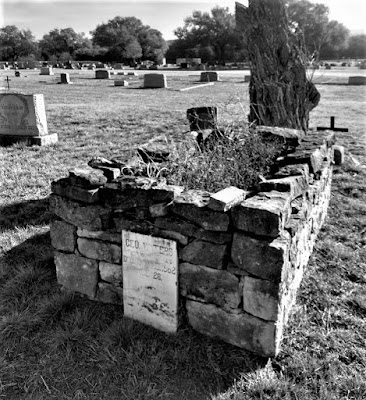 Continuing west on US-190, I came to my next geocache and cemetery. "HPHR Senterfitt" (GC1E1FE) is where Reuben S Senterfitt came to this area near Lometa in the 1860's. A town named for him gradually built up and at its peak boasted hotels, mills, stores, saloons, a school, churches, a stage stop, and this cemetery. The town declined after it was bypassed by the railroad in the 1890's. The cemetery contains the graves of many early settlers. The oldest documented burial here is that of Joseph C Howell, who died in 1877 at the age of 3. Also interred here are veterans of the Civil War, World War I, World War II, and Vietnam.

When I saw this headstone in the cemetery, my first thought was "Who is John Galt?" 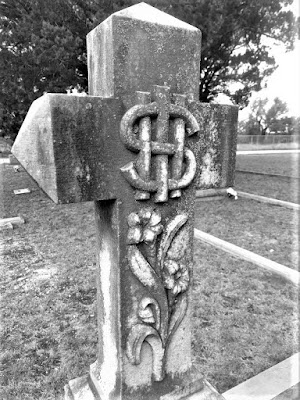 Before getting into San Saba, there's a bridge crossing the Colorado River. On the eastern edge you'll find my next geocache and a historical marker. Chadwick's Mill (GC17WEN) was a famous pioneer sawmill, flour mill, and cotton gin. Built 1874 by Henry A Chadwick and son Milam. A sturdy oak dam across the river supplied power. A millrace chiseled in sandstone channeled water to millstones. Mill and gin house were also sandstone. A fish trap in Millrace offered food and sport to customers who often had to wait several days for a turn at the mill.

This scenic spot grew to be a popular resort around 1900, with hotel and dance platform, attracted hundreds of campers. Change in course of river in 1915 forced mill to be abandoned. 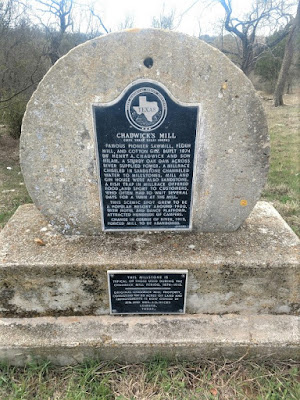 Now on US-87 almost to San Angello, I stop for two geocaches near the town of Wall. The first cache was at the "Wall Cemetery" (GC18HA4). Wall, Texas, was originally called Lipan School, then Little School, then Murray's Store. The area was a school district covering 326 square miles, which was reduced to 237 square miles in 1889. The first settlers were J. C. and Lou Bell Bunnell in 1886. The town was named for J. M. Wall, a storekeeper who served as first postmaster; the post office opened in 1906. Wall served as the trading center for the fertile Lipan Flat region, where cotton and grain are grown. The town supports several businesses and a school. The population was 250 in 1920, 120 in 1930 and 1947, and 200 in 1980 through 2000. 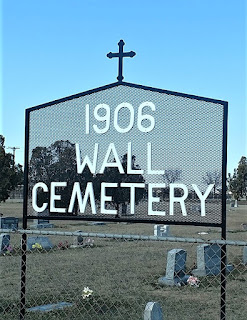 About a mile or so to the south, is the entrance to what used to be an auxiliary air field for what was then "Goodfellow Field". Goodfellow Air Force Base now. In it's day, Goodfellow Field trained pilots and this was one of the major (paved) aux airfields used in the pilot training. The skies around San Angelo were full of buzzing little blue and yellow trainer aircraft. The planes were slow compared to what they have now. Later this became the entrance to the Wall Drag strip on the old runways. They raced cars here for fifty years. Now only the gates and a geocache are left (GCNRQB).

A quick stop for food and gas in San Angelo, then it was just driving the rest of the way. I hope you enjoyed my Sunday drive. Be sure to subscribe or Follow me using the buttons to the right. Or "Like Me" at the Away We Go Facebook Page! See y'all next Sunday...
Posted by Mark at 9:57 PM