Well here I go again. Another Sunday and another long drive back to West Texas. With some Geocaching stops along the way to break up the 360+ mile drive. Getting a little bit of a later start, I didn't want to get side tracked and spending a lot of time geocaching close to Killeen. So upon leaving home, I drove non-stop to San Angelo where I make my first stop at Starbucks.

Then heading SW on US-67 a few miles down the road by the Twin Buttes Reservoir, I make my first Geocaching stop at "A Little Bit of Sprinkles in San Angelo" (GC5BPYX). After a little bit of a search I came up empty. This one hadn't been found in nearly two years and had several DNF's. And now I've also added my DNF.

Just down the road was another cache called "Burt's Bees" (GC3XXXE) that previous finders also couldn't find. One of which said there was a damaged container. So I gave it a look because it had a few favorite points. Sure enough, I found what was left of a damaged container and nothing else. So I logged my 2nd DNF of the day and a "Needs Maintenance." Uggh! 0-2 is not a good way to start the day.

Back on US-67 a little ways and I get the smiles again. I guess you could call this one an easy gadget cache or just a very creative geocache. Called "Hickory Dickory Dock" (GC6Q5QC), it's just one of those fun creative caches that someone put some thought into. 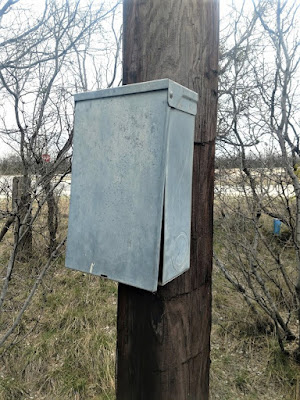 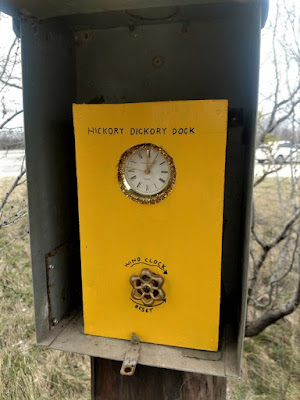 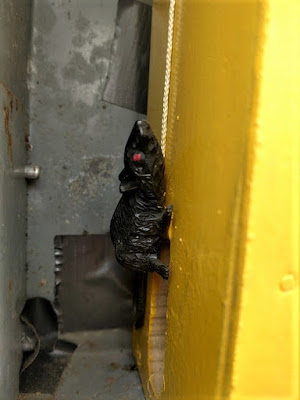 Then I found the nearby "Old House Gone" geocache (GC11J8E). I'm not exactly sure about the real history here. I don't think it was once a real house now gone. But it looked more like an urban outdoorsman camp. There was the remains of a mattress (just the metal springs), an old couch, and lots of old rusty tin cans scattered about.

One more quick geocache "To the Ramp and River" (GC1B6RP) around the Twin Buttes Lake area and I'm finally moving westbound again.

The next two geocaches on my list were for the Arden Community ghost town (GC113HK, GCMJ22). Arden, on Rocky Creek was named for John and Katie Arden, who settled a claim at the site by 1885. The community acquired a post office in 1890 with W.P. Moore as postmaster. A local public school was established in 1892. Two short-lived schools had operated before this in Arden district, one on Rocky Creek and the other at Sawyer. In 1915 Arden had a post office, a school, a church, and a population of fourteen. In 1947, when the community had one business and thirty residents, the Arden School was consolidated with the Mertzon. All of the businesses had been abandoned as of 1966, execept for a polling place used to preserve precinct lines. The passing of the school, low cotton prices, drought, and better opportunities in nearby larger towns were the primary causes for the decline of Arden. The 2000 census listed only one resident remaining. Since 1952 an Arden reunion has been held each Labor Day on Rocky Creek. The photo above is where the school used to sit. The photo below is of the Arden Cemetery which contains just 44 burials and is still in use to this day. 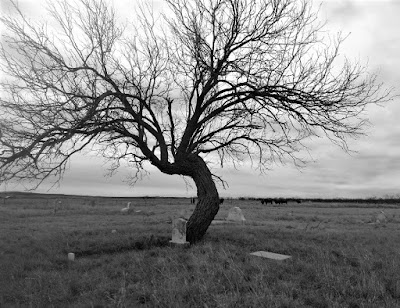 In trying to make my way back to US-67, I passed by "Middle Concho Crossing" (GCMN76). A low water crossing for a creek but it was dry here today. That one was followed by another "Just Over the Hill" (GC11KTE).

Passing through Mertzon for a few miles to the south I arrived at the ghost town of Noelke (GC15Y5N). From the cache page: "Noelke is on the Atchison, Topeka, and Santa Fe Railroad and a local road ten miles southwest of Mertzon in south central Irion County. The small settlement began as Monument Switch on the Kansas City, Mexico and Orient Railway when the road built through the area in 1910. The community was renamed Noelke in 1933 in honor of a local ranch owner, Walter Montgomery Noelke. The Monument switch continued in service in Noelke for some time after that, but county maps of the 1980s show only the location of the Noelke community. According to a local resident there was never a town here. Locally it was known as Noelke Switch. The Monument name came from a nearby mountain of the same name. The only building he was aware of was the railroad man's home which is gone. Old cattle pens are all that remain as this was the main place in the area for loading cattle for transport. Today trains pass through the area about twice a week on their way to Alpine. The ranch land for miles around is still owned by the Noelke family." 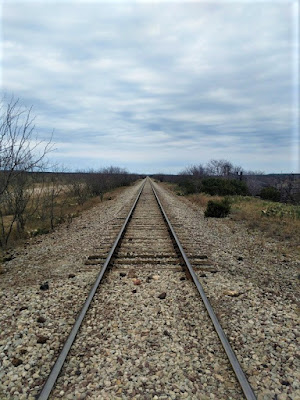 Around the curve a few miles away was my last stop and another ghost town called Pumpkin Center (GC15Y5Q). Again from the cache page: "According to a local resident, Pumpkin Center consisted of a store where area residents could get basic supplies and pick up mail. It was located at the junction of two county roads and along the Atchison, Topeka, and Santa Fe Railroad. The railroad switch at this spot was known as Suggs Switch. Nothing remains at the location. With the establishment of Mertzon, Pumpkin Center ceased to be."

That's it for me today. Still had 140 miles to go from here. Better get moving cause it's getting late in the afternoon. I hope you enjoyed the ride. See you next week...
Posted by Mark at 9:25 PM