Before we get started, let me just say that I've created a Facebook page to help you stay up to date with my blog posts. So if you're on Facebook, be sure to like it so that you'll be notified when I post an update at: https://www.facebook.com/AwayWeGoUS

This morning we drove down from Killeen to Austin, Texas where I dropped off Candy again at the airport. This time she had a business trip to Philadelphia to train some directors up there. So just me and the GeoDogs for two weeks. 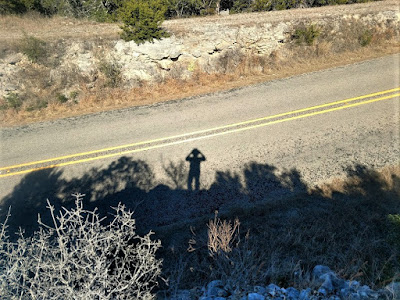 Making the drive back from Austin to Monahans, I head west on US-290 to just before Johnson City, Texas. My first stop was at Miller Creek Cemetery (GCRYZK) for my first geocache in Blanco County. From the historical marker: "Born in Tennessee in 1836, Thomas C. Felps came to Texas in 1856. He earned a living by freighting and joined the Blanco County Rangers during the Civil War. In 1863 he married Eliza V. White (b. 1846), a native of Ohio. In the summer of 1869, the couple lived with Eliza's parents while Thomas recovered from a fever. Her father, newly-appointed County Judge S. T. White, had gone to Blanco on July 21, 1869, when Thomas and Eliza were killed by a band of Indians on Cypress Creek. Only Eliza was scalped. The couples orphaned children, Thomas and Caroline, were cared for by Eliza's parents. (1975)" 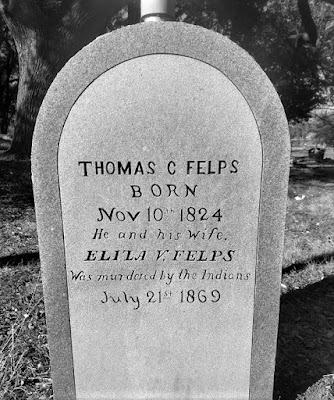 Next I dropped south down to Bandera County and a very rural geocache along a lonely highway (GC79FB5). Before leaving the county, I made another stop in the Saint Stanislaus Catholic Cemetery (GC3NZ9P). The site, on a bend of the Medina River, had been occupied by Indians, then by white campers making shingles. The founders formed a partnership in 1853 to build a town and water powered lumber mill. The town and county were named for nearby Bandera Pass. Immigrant workers from Upper Silesia from the Polish colony in Karnes County were recruited. These workers arrived in 1855, and each family received purchase rights for a plot of land.

Population of settlers increased with the arrival of the cavalry at Camp Verde in 1856. After the Civil War the town boomed as a staging area for cattle drives up the Great Western Trail. Construction of a courthouse began in 1890. Looking through the dates on the cemetery, the oldest marked headstones go back to the 1860's. But there are many unknowns as well. The statue below is from one of the many graves. 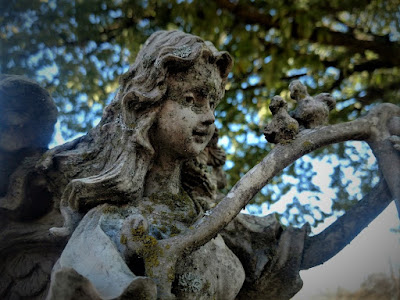 Another cemetery further to the west and my next cache was the Vanderpool Cemetery (GC5EJYM). Originally called Bugscuffle, settlements began in the 1850's but disappeared in the 1860's because of Comanche Raids. Things began to pick up again and a post office opened for three years from 1886 - 1889. Re-opening in 1902, the name was changed to Vanderpool after the first postmaster L. B. Vanderpool. The town never really took off and the population stayed small over the years. 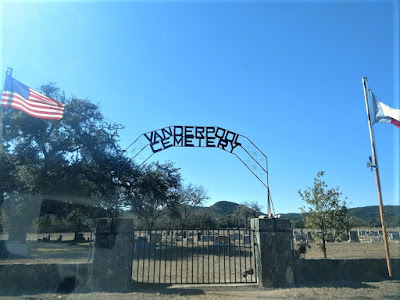 Just over the line into Real County was my next roadside cache called "A Million Miles" (GC2HWKM). I think I spent more time enjoying the views and taking pictures than it did finding the cache! 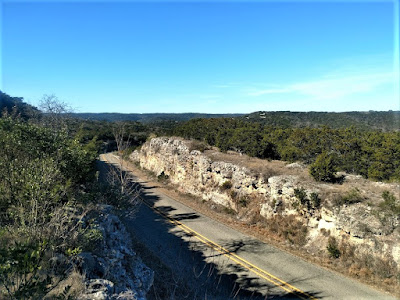 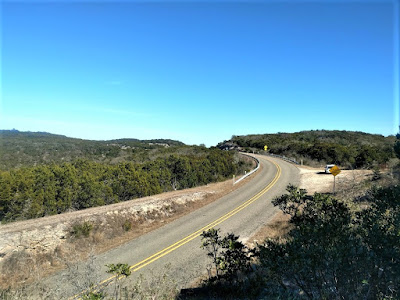 Slowly continuing westbound and still in Real County, I stopped by the Leaky Cemetery and another Geocache (GC6BV5R). This cemetery was originally known as the Floral Cemetery and served an earlier community by that name. The cemetery dates to at least 1881 when land for the cemetery was sold by John and Nancy Leakey for one dollar and a cemetery plot.

The oldest documented burials here are those of Sara Catherine McLaurin (b 1849) and fifteen-year old Allen Lease who were killed on April 19, 1881 in the last Indian raid in the Frio canyon area. There are over 900 documented burials here as well as a number of unmarked graves. Those interred in the Leakey Cemetery include pioneers, children, elected officials of Real and Edwards counties, community leader, and veterans. The founder of the town, John Leakey and hes wife Nancy are both buried here.

The next two photos were taken at the Leaky Cemetery. The first is one of the many statues. The second is the grave marker for Lucinda Smith Cope which I found to be an interesting story. 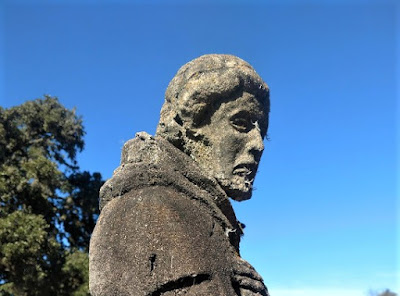 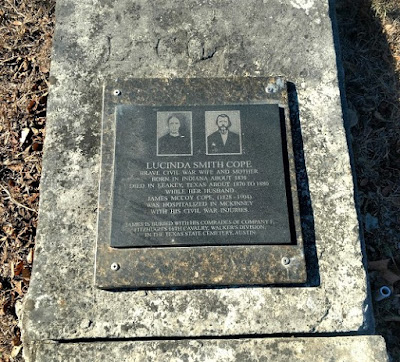 I say this often, but I love Geocaching because of the places it takes you that otherwise you'll never get to see. I mean if I wasn't Geocaching, driving from Austin to Monahans is only 375 miles and about 6 hours. Taking the backroads and siteseeing, I'm already at 4 hours and barely halfway. However, If I had taken the I-10 route, I wouldn't have discovered roadside attractions like these. This farmer / rancher takes their old equipment and sets it out in a field under a banner of "Rust N Peace" (GC3KNN5). The total size is probably 3-times the size as what you see in the photo and includes a few old trucks. But I wanted to get the sign in clearly for you to see. 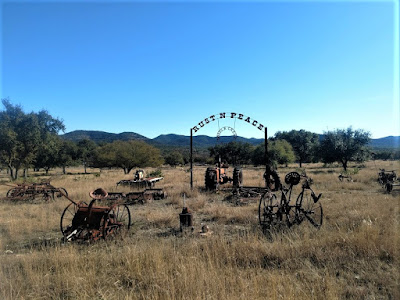 Driving up Hwy 55, I get to my next quick county geocache called "On the way to Granch" (GC2F18G) for a find in Edwards County. And it gave me a nice photo: 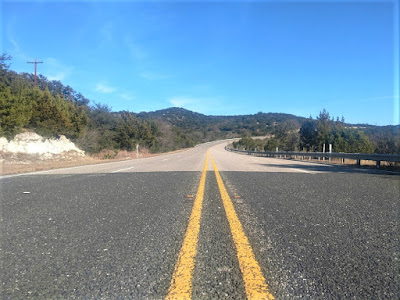 Up in the NW part of the county at the intersection of Hwy 55 & Hwy 277 there's a roadside picnic area (GC1QP0N). Before the Interstate Rest Area/Plaza's with full facilities, many highways just had a safe pull off area with picnic tables. This one was slightly fancier with a round shallow pool and water fountain. Why have such a thing way out in the middle of nowhere? I guess for some cool relief during those hot Texas summers when not many cars had air conditioning. Though now it doesn't look like it has seen any water in a very long time except during a rain shower. Regrettably, I forgot to take any photos. But if you click on the GC# link, you can view the photo gallery there.

My last stop for the day was another one of these roadside picnic areas. But this time is was one of my own Geocache hides called "Because They ALL Should Have One - Dino Tracks" (GC6HYCZ). I've only hidden a couple of caches at these picnic areas and I give them the name "Because They ALL Should Have One" because I was once a truck driver. And I was also a Geocacher during that time. And I had to pass up a whole lot of caches because it's kinda hard to park a big truck pulling a 53' trailer at a roadside cemetery and many others. Of the caches I listed just in this blog, I could probably only have found just the previous picnic cache as a trucker. Maybe the "Million Miles" cache IF I already knew about the little pull off area in advance. More than likely though I would have just stuck to the Interstates.

At this particular picnic area there are also a couple of dinosaur tracks out behind it, so it makes for an even better reason to stop. This cache also went missing as indicated by previous cachers, so I stopped by to replace it. After a few photos of the road home after the sunset, I drive the last hour back to Monahans, Texas. That 375 mile, 6 hour drive turned into a 480 mile, 10 hour Geocaching Adventure. But I think it was worth it! 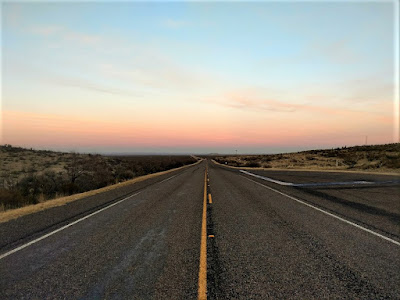 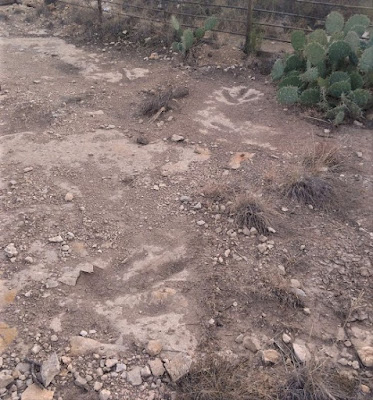