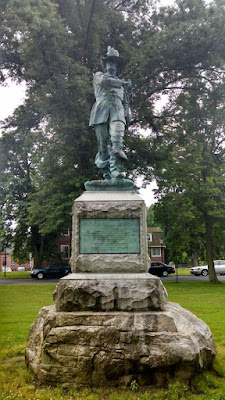 On day three of our summer road trip to New England, we found 16 Geocaches in Connecticut and Massachusetts. Our first stop was this statue located in Windsor, CT. It is of Major John Mason who was born in England in the year 1600. He immigrated to the New World in 1630 and founded the towns of Windsor, Old Saybrook, and Norwick. He was the Magistrate and Chief Military Officer of the Connecticut Colony. He died in 1672. This monument was erected by the state of Connecticut in 1889. This is just another example of the great benefits of Geocaching. You learn so much history!

Across the street was the First Church, the oldest Congregational Church in Connecticut. Its beginnings trace to 1630 in Plymouth, England, where 140 men and women sailed on the Mary & John bound for the colony of Massachusetts. Hearing from the indians of the fertile land along the Connecticut River, a small contingent of settlers, including the above mentioned Major John Mason, headed southwest establishing the first Connecticut town of Windsor in 1633. In 1635 the First Church congregation ventured from the settlement in Dorchester, MA and joined the rest in Windsor, CT.

Next door to the church is the Historic Palisado Cemetery which is home to the oldest legible gravestone in Connecticut. That gravestone belongs to the Reverend Ephraim Huit who died in 1644.

Heading further north up the road along highway 159, we passed by this "Drastic Park" made from scrape metal on the side of someones front yard. After stopping for a quick photo opp, I checked my phone and lo and behold there's a Geocache located there as well! A magnetic hide-a-key located inside the mouth of one of the dinosaurs. 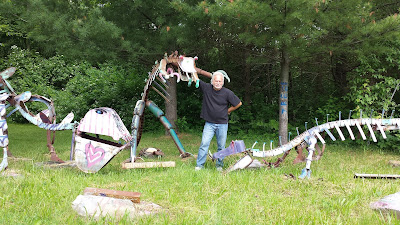 Just a few more miles up the road near the Bradley International Airport, was our next to Geocache stops. The first at the Connecticut Fire Academy and this memorial to the brave men and women who put their lives in danger for others. Next door was another cache at the New England Air Museum. 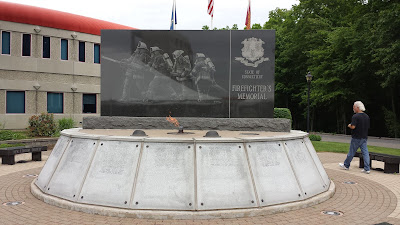 Crossing over into Massachusetts, we made it to our next Geocache located at the entrance to Forest Park, in south Springfield, MA. There we found what had to be a 20' totem pole carving of Omiskanoagwiak, the Wolf People Medicine Man of the Pioneer Valley Indians. 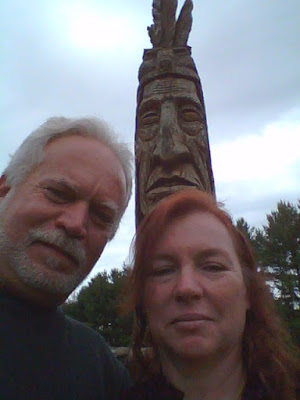 From there, we detoured a little to the east to grab another Virtual Geocache. Most geocaches have an actual container and logsheet to sign. A Virtual Geocache was allowed in the early days of caching for use where a container could not be placed. Like the above medicine man statue was a virtual. It required emailing some information requested from the plaque. But they no longer exist to create new ones and when one gets archived, it cannot be re-created. So we always look for these types and sometimes go out of our way just to find one.

The next one was in the town of East Longmeadow, settled in 1744 and known for its sandstone quarries. There we found a stature called "The Quarryman" honoring those who quarried red and brown sandstone from over 50 quarries during the 1800's.

From there we continue on I-91 north to Holyoke, MA and stopped along the Connecticut River to view the dinosaur footprints. This was the location of an Earthcache. Similar to a virtual, there's no actual logsheet to sign. You read and learn about the location and then email the required information. 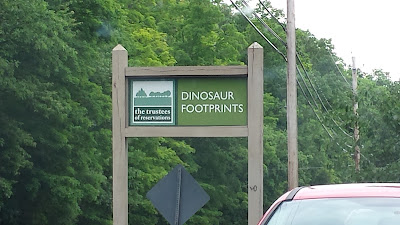 The next stop on the list wasn't much of a photo opp, but a piece of history. The virtual cache location was a piece of land with a large boulder and plaque. The plaque reads: "This boulder stands on part of the original home lot of Moses Hutchinson, one of the first five settlers of Old Pascommuck. On May 24, 1704, Pascommuck Settlement was attacked by Indians. Of the 33 people then living in this region, 19 were killed, 8 escaped, 3 were rescued, and 3 were carried captive to Canada.

Further up the road gave us a chance to stretch our legs and do some hiking. The next several Geocaches were located within the 400 forested acres of Mt Holyoke and J.A.Skinner State Park. Upon the mountain was the Summit House built in 1851, a memorial for a WWII plane that crashed here, some great views, and even some early graffiti! Yes, there was a name and date carved on one of the boulders from 1873. This carving went undiscovered until the 1970's. 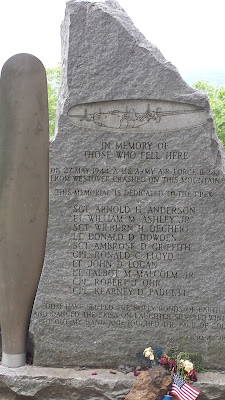 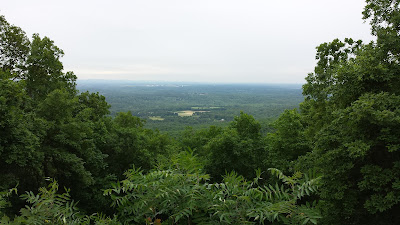 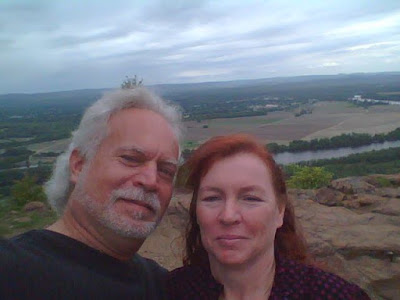 Two more stops in Old Deerfield and in Greenfield for two more virtual caches. Old Deerfield was Indian land called Pocomtuck, settled by men from Dedham in 1671. Attacked by Indians, burnt and abandoned in 1675. Reoccupied and attacked in 1704 by the French and Indians, who took 47 lives, and carried off 112 captives to Canada, of whom 60 were later redeemed.

Finally, we settled in for the night at the Riverside Hotel located right alongside the Connecticut River on the border of New Hampshire and Vermont. A beautiful view from our room overlooking the river and the end to another great day of Geocaching, adventure, hiking, and history.