So this morning after breakfast and finding a Starbucks, we found a few more caches around Cleveland, TN before hitting the highway. A couple more quick caches along I-75 to complete the county, we arrived in Knoxville.

While this next cache I had already found years earlier while I was a truck driver, I thought it was cool enough to show Candy. It was located at the Asbury Cemetery on the SE side of Knoxville. The huge headstone is for A. J. Pete Kreis. If you've ever watched the Indianapolis 500 race, they usually play a few scenes from the long history of the Indy 500 and usually a clip showing an old race hitting the wall, flipping over the wall, and bursting into flames. The 34 year old driver was killed in that tragic accident. His huge headstone is a replica of the famous race track and has his car at the spot where he lost his life. 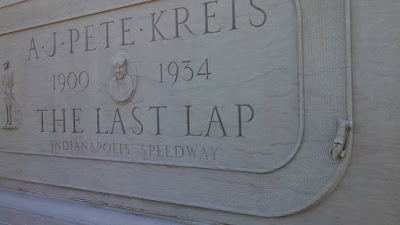 Crossing over into Kentucky and another cemetery cache by this statue of Jesus and a woman who appears to be the Samaritan woman at the well discussing the "living water." The cemetery is the Whitley Memorial Gardens just north of Williamsburg, KY. 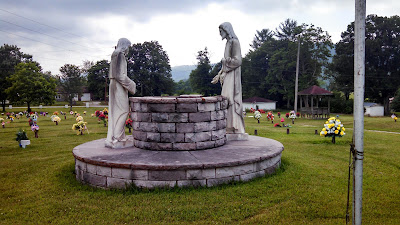 Another stop for a new county cache, we encountered a short hike to this tree which after falling over against another decided to change directions. Can you spot the cache in the photo? 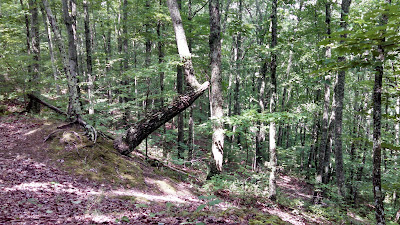 A couple of stop, grab a new county cache and go's later, we came upon this historic virtual cache. Located in Richmond, KY, the White Hall State Historic Site was first built in the late 1700's with a major addition constructed in the 1860's. 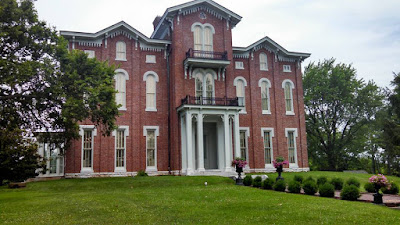 The next stop of interest along our route today was this aluminum teepee. Don't know why it was built or the purpose it now serves, but interesting to say the least. The things you see while Geocaching! 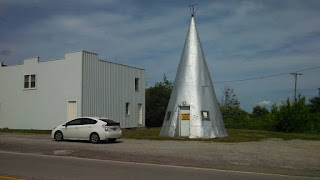 Well day #2 is over and we just crossed the border into Ohio and our hotel for the night just north of Cincinnati. We ended the day with 25 geocaches and many new counties on our map. Time for some much needed rest after a great day!