Today was a day for Geocaching fairly close to Lubbock. Getting a late start after breakfast, we headed east over to Ransom Canyon to grab a virtual cache (GCGPZH). High above overlooking the canyon is a very unique house. It kinda reminds me of a kids Viewfinder from the one side. You can't tell from the photos below, but the side facing the lake is just a giant glass window. 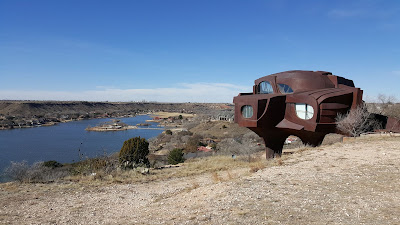 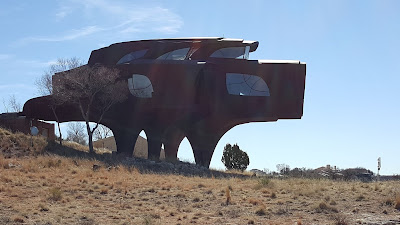 A couple of houses down and across the street is this Hobbit looking house. 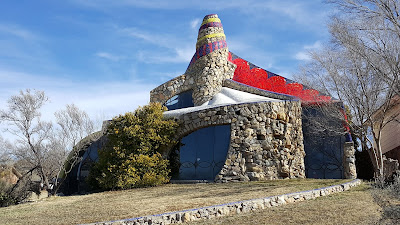 As we continued to cache around the lake, hundreds, maybe thousands of ducks were flying by overhead. Not sure you are able to see them flying in formation on the device you are reading this one. Hopefully you can. 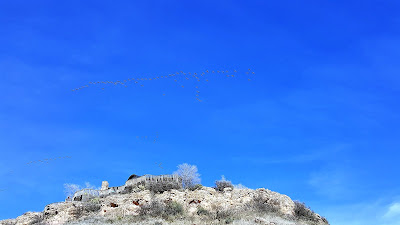 After Ransom Canyon, we headed south down US-84 a few miles to the town of Slaton. There we found our next Geocache at the Slaton Harvey House (GC1EKVV). From the historical sign: The city of Slaton has historic ties to the railroad. For decades the site was ranchland until the Santa Fe Railway sought a location for a division point to service trains. The Santa Fe bought the land in April 1911, naming the townsite for rancher and banker O. L. Slaton. Passenger and freight service became central to the economy, and the company built a passenger depot and Harvey House the following year. Scottish immigrant Fred Harvey created the Harvey House chain in 1876, partnering with the Santa Fe Railway, which built the restaurants and provided space on their trains for food and supplies. Harvey provided the equipment, management and hospitality staff, including the hostesses known as Harvey Girls.

The Slaton Harvey House served efficient but elegant meals to 42 passengers at a time around a horseshoe shaped counter on the first floor, which also housed the kitchen, bakery, gift shop and manager's office. The manager and his family and the Harvey Girls roomed on the second floor. The Slaton Harvey House, a commercial and social center, operated for 30 years, briefly reopening to serve troops during WWII. The building remained a passenger depot until 1969; the railroad later converted it to a freight depot and operations center before vacating the property in the 1980's. Slaton citizens coordinated the preservation and restoration of their landmark building.

From there we drove north on some backroads to stretch our legs and do some hiking. There were a couple of caches with a high terrain rating. Sounds like an adventure! We arrived at the first area (GC4C0MZ) and I drove around the curve past it and then back again trying to figure out the best parking and approach to the top of the hill. It was an exhilarating climb with a fantastic view! So peaceful and quiet with only the sound of the wind out there. 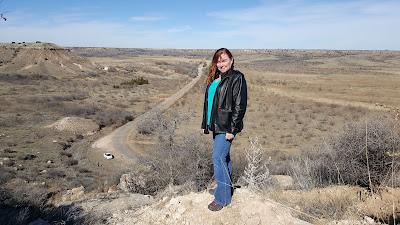 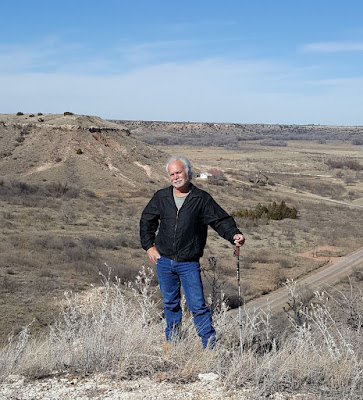 A couple miles away on the east side of Horseshoe Canyon was the next cache (GC1K5MW) and the next hike. Slightly easier than the first one, but still an amazing view and peaceful. Only one car had passed the whole time up and back. 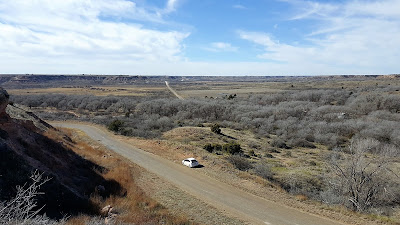 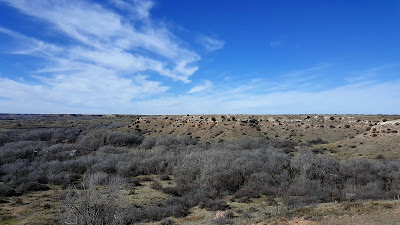 On our way to the next couple of caches out in the middle of nowhere, we passed by a herd of deer grazing in a field. 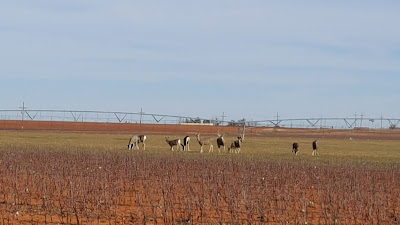 Our last cache for today was located at Emma Cemetery south of the town of Ralls. Emma is on that short list of ghost towns that were once county seats. Business partners R. L. Stringfellow and H. E. Hume were store owners in the Crosby County seat of Estacado, when they bought a section of land in 1890. A post office was granted that year and the name submitted was Emma - after a woman who later married one of the partners. History doesn't seem to record if she became Mrs. Stringfellow or Mrs. Hume. 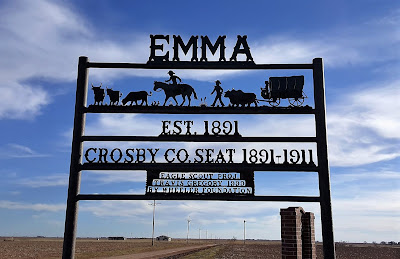 The central location made Emma a consideration for the county seat and since residents of Estacado were already drifting to the newer community, an election was held in the Fall of 1891. Emma squeaked through by a six-point margin (109-103). The residents of Estacado moved the courthouse and other prominent buildings to Emma and the town prospered for awhile. By 1910 there was a population of 800 and Emma had all essential businesses including a bank and newspaper.

Emma's future seemed bright up until it was bypassed by the railroad in 1910. The shoe was now on the other foot and Emma lost out to the new town of Crosbyton in an election held in September of 1910. This election was also close (198 to 120) and soon the former townspeople of Estacado and Emma were moving again - this time in an organized exodus that consisted of steam engines, mules and most of the male population. The former courthouse was dismantled and taken to Cedric and the next year the Emma post office moved to Ralls. Today only the historical marker is left.

History lesson is over. Now back to Geocaching. Cemetery caches are one some of our favorite caches to find. This one happens to be a virtual cache (GCHA69). Now since we've been Geocaching, we must have been to a hundred or more cemeteries. THIS is a first! Every headstone we've ever seen said "Died", "Death", or simply "D". Poor Tommie Horrell had the truth told about him. He was MURDERED on Jan 5, 1894 at the young age of 24. 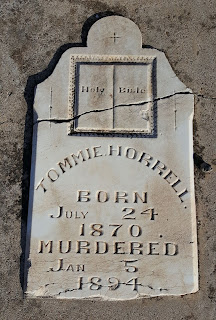 While we ended the day with only ten caches, they were really good quality caches. Unusual houses, history, hiking, a cemetery... this is why we like this game! Where do we go to tomorrow? You'll just have to come back and see!
Posted by Mark at 11:38 AM