This morning after dropping Candy off at work in Kirbyville, I drove further north up to Jasper County, Texas. Jasper itself is a small town with only a few Geocaches around. But I took a drive up to check out an apartment and to the more rural areas of the county to go Geocaching.

After picking up one cache in town at a half vacant shopping center, I drove north on US-96. My first stop was a small neglected cemetery. A couple of secondary roads off the main highway later, and passing by the overgrown hiking trail going up the hill towards the cemetery, I finally found the entrance.

It was about a 1/4 mile hike to a small fenced area of about 10' by 20' with only one marked gravesite. Baby Girl Behannon who lived only 9 days in 1884. Getting back to the cache though, it was still further into the woods and required some bushwhacking to get to. But having done so, I was not only rewarded with finding the cache but also finding a little creek. 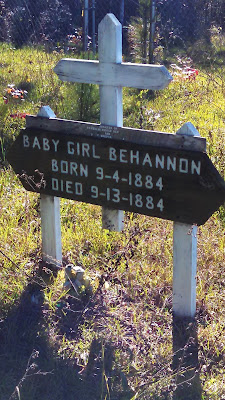 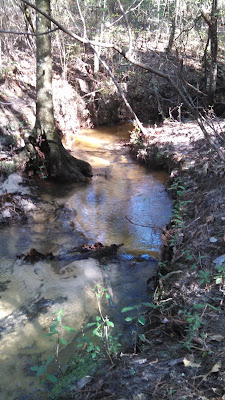 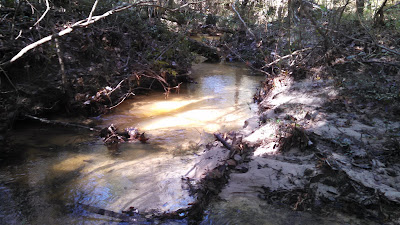 Several more Geocaches later and I came upon another cemetery cache. Nothing particularly historical or significant with this one, but it was a cemetery cache. 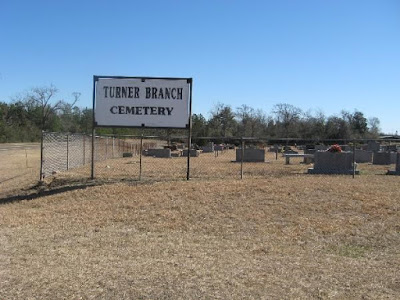 The last cache for the day was a magnetic key holder hidden about halfway down a bridge over another creek. No place to park on the bridge, so I parked down on the shoulder about 250' away and walked back. After leaning WAY over the side to reach down for the cache and signing the log, I heard dogs barking. Looking in that direction, I saw 3 dogs barking and running towards me about 500'-600' away. YIKES! Fortunately the car is in the other direction! I quickly replace the cache and sprint towards the GeoMobile. Yes! Inside the car with doors closed with maybe 100' to spare. That was close.

Enough excitement for today.
Posted by Mark at 3:35 PM