2016-02-13: More Geocaching in Cemeteries Learning History and Route 66 Through Texas

Welcome back. Today was a little bit of everything. Our Geocaching goal was to pickup a few new counties and visit some classic Americana along Route 66 in Amarillo, Texas. 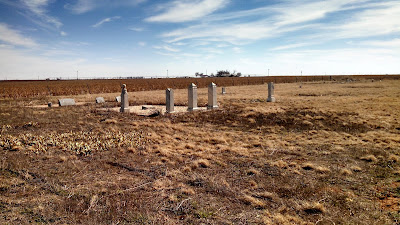 Our first cache (GC5NEFN) was another ghost town cemetery in Hale County. The Running Water Cemetery dates back to the late 1800's. Running Water Draw was near the headquarters of the Morrison ranch, established in 1881 as the first ranch in the county. Later the land became part of CC Slaughter's extensive holdings. Settlers bought railroad lands in the area, and in 1890, a post office called Wadsworth was established. For promotional reasons the name was changed to Running Water in 1891. That year a school was built. The railroad bypassed Running Water, which was near this cemetery, and in 1928 the community's businesses were moved three miles north to Edmonson Switch on the rail line. In 1935 the Running Water post office was moved to Edmonson Switch and two years later was renamed Edmonson. The old site of the Running Water community was abandoned.

The next cache was a quick stop by the Hart Cemetery (GC5TKDM). 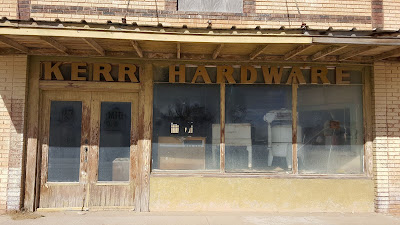 Then we arrived in the town of Dimmitt for a full-sized time capsule. Mr. Kerr was a man of principal and the proprietor of Kerr Hardware (GCP930). The Texas Limited Sales, Excise and Use Tax Act was enacted by the 57th Legislature and became effective on September 1, 1961. Mr. Kerr got upset because the State of Texas had the audacity to require him to charge a sales tax. Needless to say, Mr. Kerr said he would "lock the doors" before he did this. The local legend goes that Mr. Kerr refused to charge the citizens sales tax and walked out and never came back. You will see brand new bicycles, tricycles, radios, fishing baskets, old wringer washing machines, riding toy tractors, appliances, on and on. Take a peek in the windows, everything is exactly how Mr. Kerr had left it over 50 years ago! I think I'd like to buy this place, clean everything up, and just keep it on display. 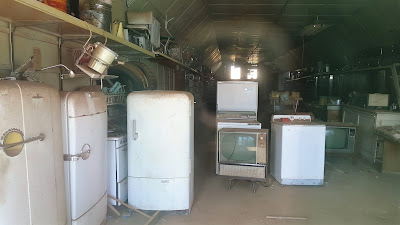 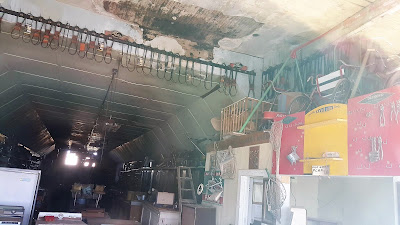 Also in town was The Olde Hotel, built in 1929 and had 30 upstairs rooms and two restrooms. The hotel ceased operation in 1977 and was converted to apartments in 1980. The upstairs still houses six apartment rooms and four bed/breakfast rooms. The first floor has been home to Antiques Plus since 2002. 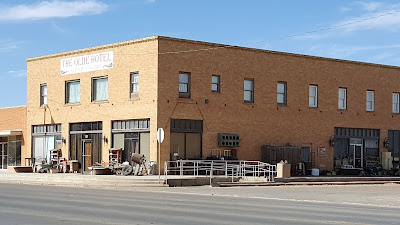 The Ozark Trail Obelisk was constructed in the 1920's and was originally in the middle of the highway intersection and marked the distance to other towns along the trail. On another corner of the courthouse lawn is one of the many Quanah Parker Arrows that mark the Quanah Trail throughout the Texas Plains. 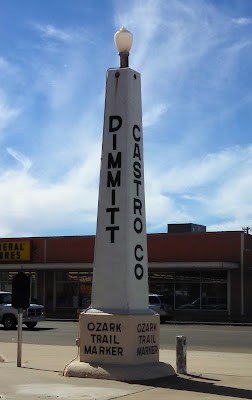 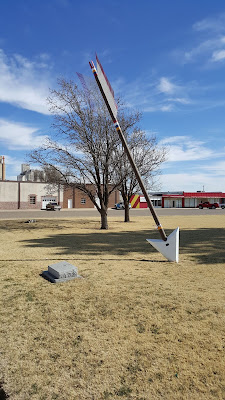 A few more caches later and we came to the St. Mary Cemetery (GC4VHW6) cache. German Catholics settled the north side of Umbarger and Swiss Catholics to the south side of town in the early 1900's. 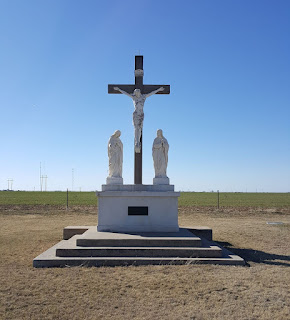 Heading on up to Amarillo on the south side of town, we come to our first virtual cache (GCH59D). A strange site to say the least. According to the historical marker:

In 1819 while on their horseback trek over the great plains of New Spain, Percy Bysshe Shelley and his wife Mary Wollstonecraft (author of "Frankenstein"), came across these ruins. Here Shelley penned these immortal lines: 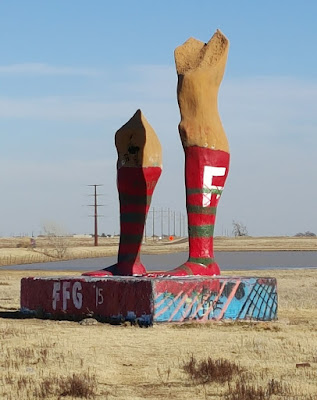 I met a traveler from an antique land who said: "Two vast and trunkless legs of stone stand in the desert, near them, on the sand, half sunk, a shattered visage lies, whose frown, and wrinkled lip, and sneer of cold command, tell that its sculpture well those passions read, which yet survive, stamped on these lifeless things, the hand that mocked them and the heart that fed. And on the pedestal these words appear: "My name is Ozymandias, King of Kings: Look on my works, ye mighty, and despair!" Nothing beside remains. Round the decay of that colossal wreck, boundless and bare the lone and level sands stretch far away." (1819)

In reality: Inspired by a similar set of big legs in the Egyptian desert, Stanley Marsh 3 (who commissioned the nearby Cadillac Ranch) paid a guy named Lightnin' McDuff to build the legs. 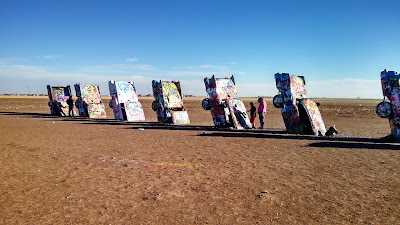 Speaking of Cadillac Ranch (GCG71X), that was the next stop of our day. I once paid a visit here to this Route 66 roadside attraction back in 2009 while I was a truck driver. At that time, I was the only one out here. With the exception of a couple dozen cows grazing about. Back then the cars were also covered with graffiti. Today is a little different. Candy had never seen this before. There is also a traditional cache here too (GC4K7Y3). 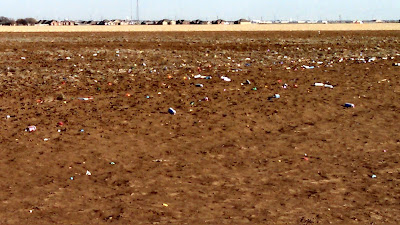 But sadly there were no cows anywhere in sight. There where about 25-30 people in the stages of coming, going, and painting. But the worse part was that there were hundreds, maybe thousands, of spray paint cans littering the field. Even with the 3 large dumpsters back by the fence and parking area for those who must leave their mark, there are still those disrespectful people who could care less and just toss their empty cans on the ground. Reading through some of the Geocaching logs though, some cachers bring bags out here to pick up some of the cans as they make the finds. If we ever come back out here, we'll definitely be prepared with extra bags.


One a good note, as we were leaving the area getting back to I-40, a few blocks away was the Amarillo West RV Park which re-created its own "Cadillac Ranch" without the graffiti, restored Cadillacs, and a giant cowboy statue. A better photo indeed! 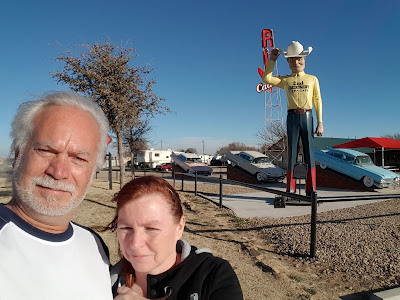 And you can't visit Amarillo without a stop by the Big Texan restaurant complex. There's also a Travel Bug Hotel here as well (GC30FGP), though I was disappointed when I found it. The previous one here I found back in 2009 was listed as a LARGE cache and was a 10 gallon plastic storage container. A fitting Texas sized cache. That one was archived and this new one put in place. Still listed as a "large" size cache, this one wasn't much bigger than a sandwich size Tupperware. 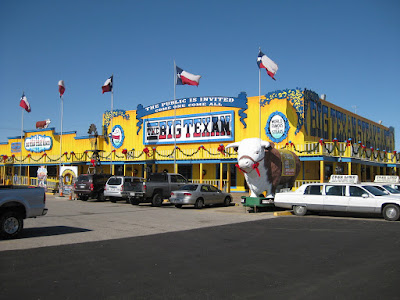 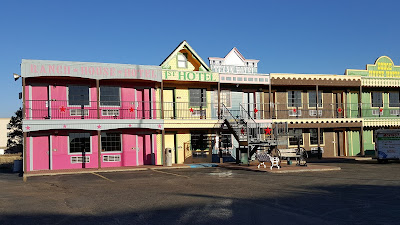 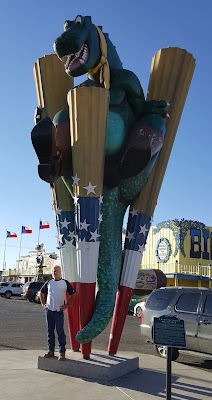 A few blocks down was the American Quarter Horse Hall of Fame and Museum next to the AQH Headquarters. There wasn't a cache here, but several life size horse & rider statues as well as this unique wall of running horses. 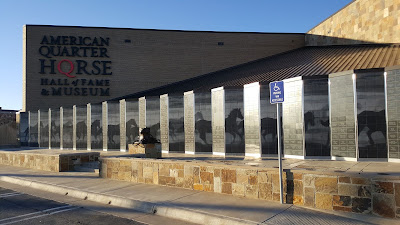 Getting late in the day and we still had a 2 hour drive home. But there were two more virtual caches in the downtown area I wanted to get. The first (GCGXBZ) was at this park that had a 1-ton granite globe that was supposed to float on the water. But the water from underneath was turned off so you couldn't spin the globe. The second photo below was an old train locomotive (GCGBMY) built in 1930 and traveled 1,750,000 miles before retiring in Nov. 1953. 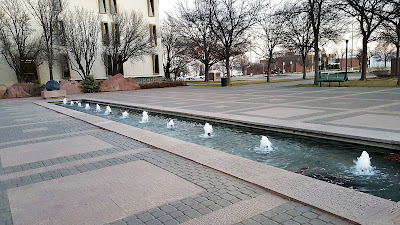 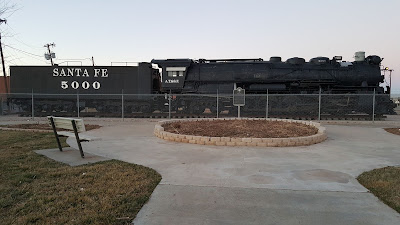 What a hodgepodge of things seen today! From 100 year old cemeteries, historically preserved hardware store, roadside oddities and attractions, to old trains. We sure like this hobby!
Posted by Mark at 9:55 PM