Today's Geocaching adventure allowed us to learn some history, view some great scenery, pickup some new caching counties, and just having some fun in West Texas. It was still kinda cold out, but by heading southbound at least there wasn't any snow on the ground. 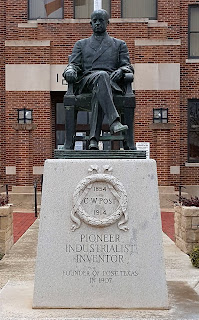 So we headed down US-84 to our first stop in the town of Post in Garza County. I'm sure we have all heard of Post Cereals. And usually when I thought about Post Cereals, I think Battle Creek, Michigan. However Charles W. Post, internationally known creator of Post Cereals, advertising genius, inventor, innovator, and founder of Post City in 1906 had other ideas. Through the purchase of the Curry Comb Ranch and adjacent land approximating 225,000 acres, he began his dream of building self-contained model community of towns and farms.

Mr. Post financed, supervised and built the town without profit to himself. Settlers were offered ownership of business or farm sites far below cost. Mr. Post planned the community of debt-free private ownership in every field of endeavor, and sought to make his vision true to its purpose.

I found his story very fascinating. And our first Geocache brings us to the Old Post Sanitarium (GC509R3). Built in 1912 by C. W. Post's Double U Company and was the first hospital in this part of West Texas. The finest facilities of the day included x-ray laboratory, operating and sterilization rooms, nurses training, diet kitchen, all rooms private, and steam heat.

It is now a museum for all things pertaining to West Texas. But two rooms are dedicated to the original hospital setting and C. W. Post's office furniture from Michigan. 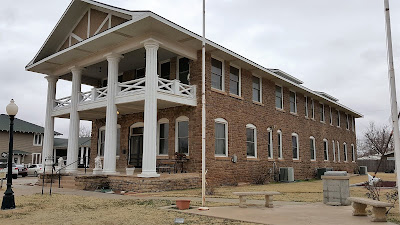 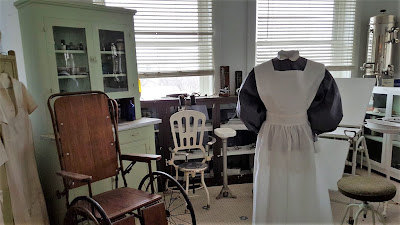 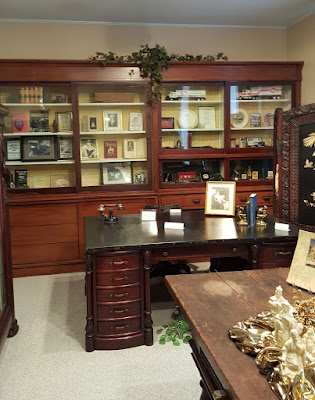 Next stop was a cemetery cache (GC5G98H) at the Terrace Cemetery on the east side of Post. After Post, we headed south on FM669 down to a town called Gail in Borden County. At the Gail Cemetery was another cache (GC5KWZH). This cemetery dates back as early as 1891.

Also located in Gail was the Borden County Courthouse and the location of our next Geocache. The Coyote Hitching Post (GCPJ6C) cache looks like it just might be an original hitching post from many years ago! 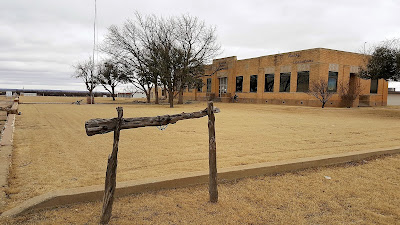 Right across the street from the courthouse, was the Dorward Drug Store. David Dorward arrived in Borden County in 1892. He opened the drug store in 1901. As the town began to decline in population, Dorward Drug became the focal point of the community by providing over-the-counter medicines, refreshments, ice, and most importantly, a gathering place to hear the local and area news. When the telephone switchboard closed in 1918, the drugstore had the only telephone serving Gail and surrounding farms and ranches until the 1950's. Telephone messages received by Mr Dorward at the store would then be delivered to local residents or to outlying farmers and ranchers. The drugstore had fallen into bad shape, but was restored in 2012 when new owners acquired the land. 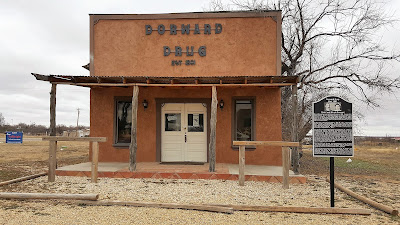 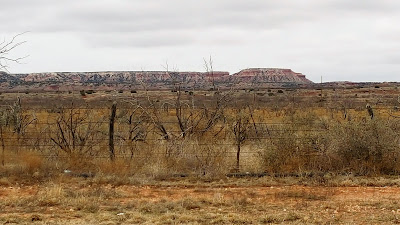 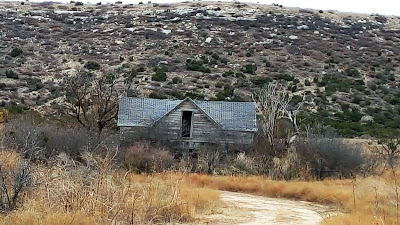 Continuing west on US-180, enjoying the landscaping and a few old abandoned buildings along the way, we drove over to Lamesa, TX. Our first cache in town was called The Big Show (GC22VH3). A rare drive-in movie theater, that's closed during the winter, but still in operation during the rest of the year. 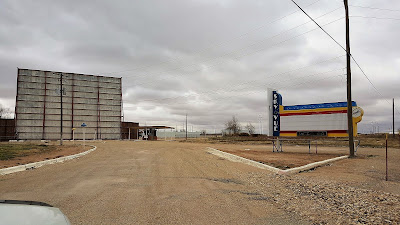 There were several Geocaches in this town, but another one of our favorites besides the drive-in was a piece of historic Americana. This nostalgic statue (GC33QT6) was once the Uniroyal Tire & Rubber Gal now wears the uniform of the local high school.

So after several more caches around town, we headed out southwest of town to the middle of nowhere. But because of Geocaching we found this old Chevy pickup cab sitting in a field (GC1235H). When you come across something like that you just gotta take a photo! 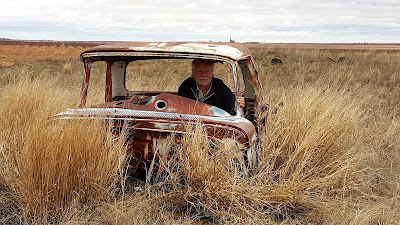 We continued southwest into the town of Andrews, located within Andrews County. There we stopped for a virtual cache (GCF255) at the county courthouse. Even though it was closed being the weekend, we were able to look through the glass doors to get a peak at the 2,000,000 Kirby vacuum cleaner which was made in 1979.

Also in Andrews and another cache was the Andrews County Veterans Memorial (GC30QMV) honoring all the veterans from the county who fought in all the wars to date. 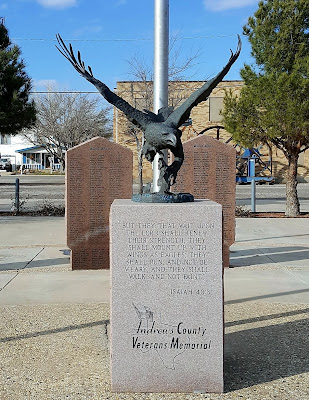 Driving north towards home, we ventured slightly west over to the Ghost Town of Shafter Lake. In 1908 the population of Shafter Lake was about 500. It has 3 hotels and a couple of trade stores. The editor of the paper advertised that there were vast fields of green lush grass and fresh water in the lake. The grass wasn't green, and the water was alkaline, because there is no outlet the water just sits there. In 1910 there was a vote on whether Andrews or Shafter Lake was the County Seat. Shafter Lake lost, and the population dwindled down to just a few families. In 1916 a tornado went through what was left and destroyed every thing except one house. It happened to be the Post Masters house (GC1B72), and his descendants live the newer house next door. 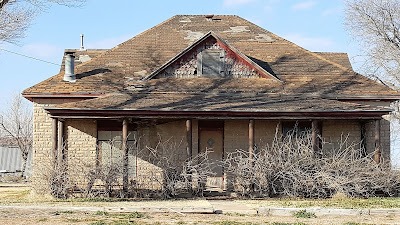 On the way back to Lubbock, we stopped for several more caches in new Texas counties. While here in Texas, we've seen plenty of oil wells. But along the way today, this was the FIRST time we saw one painted up in camouflaged! 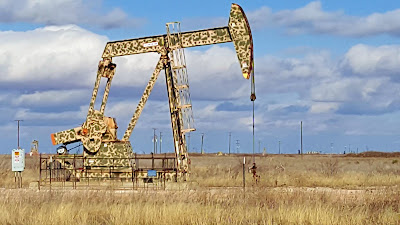 Overall we found 17 new Geocaches, several more new counties, learned lots of history, and saw some great sites. That's it for today's adventure. We hope you have enjoyed reading our stories and following along. Please feel free to comment and let us know you were here. Also feel free to share our blog with your friends.