Hello again and welcome back! Today's Geocaching goal was to pick up some new Texas counties and we wanted to see another side of Texas landscaping. So from Beaumont, we headed west on I-10 to US-59 southbound.

The first stop was near a historical marker for the town of Kendleton which reads: "The site on which Kendleton now stands was originally a Mexican Land Grant to settler Elizabeth Powell, whose house was an early-day stage stop. During the Texas revolution, in 1836, Santa Anna's Mexican army camped near here. Later the settlements of Oak Hill and Humbolt existed briefly. Kendleton began during the Civil War reconstruction when Wm. E. Kendall sold land, for as little as 50 cents an acre, to assist freed negroes in starting their own farms. The rural village was named in his honor when the railroad came through in 1884."

A few more geocaches along the way and we soon pulled into the town of Wharton, TX. We were pleasantly surprised to find that Wharton was one of those town that had painted huge murals on the sides of their buildings. Here is a small sampling of those murals. One dedicated to the towns doctors, another of the different churches, and the last just some decorative artwork. 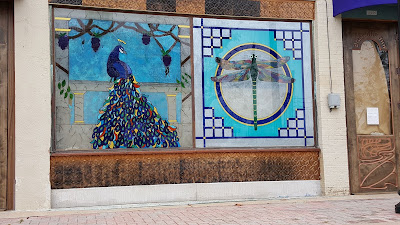 One of the towns geocaches was across the street from and brought our attention a TRUE tree frog. Literally! This frog statue located in a residents front yard, was the result of a skilled chainsaw sculptor. 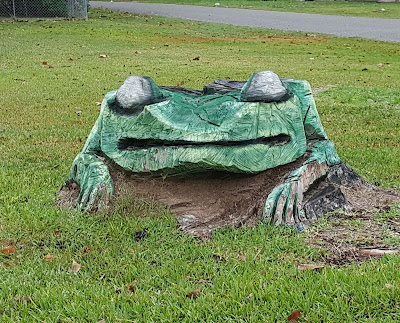 Continuing south on US-59 and a couple more caches later, we came across another historical marker cache. "Here, in the 1890's, the celebrated Texas Cattleman A. H. "Shanghai" Pierce (1834-1900) platted the townsite of Pierce. "Shanghai" had hopes of it becoming the county seat. In 1894 he had 160 acres surveyed to become the Pierce Townsite. He built and named the streets, laid out a public square, courthouse square, academy square and a cemetery ground. A church was built and a two-story grocery store. He then decided to build a grand hotel, which would accommodate cattle buyers, traveling salesmen, etc. The spectacular structure, with open porches on two sides of both the first and second floors, would be a convenient stopover between Victoria and Houston. It was a three-story, 22-room mansion built in Steamboat Gothic style. The widow's walk on top provided a panoramic view of the whole countryside.The town of Pierce did not develop as "Shanghai" hoped it would. The magnificent hotel saw few, if any, overnight guests. Over the years the building gradually deteriorated and was demolished in 1980. The New England styled widow's walk and some of the railings have been restored on the original site."


A few more caches later, we eventually had to turn north on Hwy 111 up to US-77 north to loop back around heading towards Beaumont. In the little town of Hallettsville, we stopped to pick up a virtual cache. At the site of this old oak tree is a historical marker that reads: "Old Hanging Tree. Gallows used Sept. 12, 1879, at public hanging of 'Pocket', an Indian, killer of Englishman Leonard Hyde." 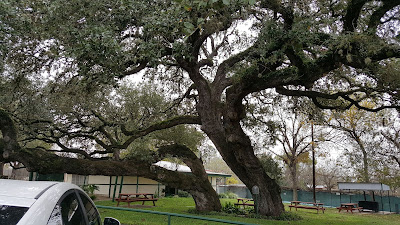 We ended the day with 19 geocaches and several new Texas counties. We also learned a lot of history and saw some great artwork. Overall another great adventure.
Posted by Mark at 11:15 PM