Today we wanted to do some rough terrain hiking and Geocaching. Our last few months back in Florida, we starting doing the bushwhacking and hiking through scrub and swamp. While the chance of hiking a swamp in West Texas is ZERO, there is opportunity to do some bushwhacking through the forest.

About an hour east of Lubbock are several Geocaches with high terrain rating located within Dickens Springs. So after breakfast, we headed out on US-82 into Dickens County and the town of Dickens. After stopping by the historic Dickens County Courthouse and the County Jail buildings for photos, we arrived at the Dickens County Springs Park from 1891. 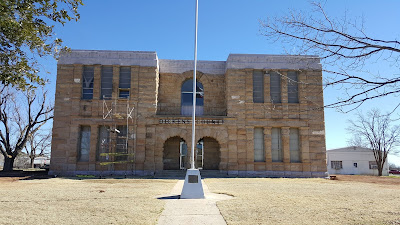 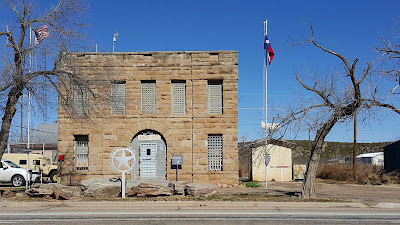 The history of the springs from the Historical Marker:

At one time, water covered this area. Sandstone, the prominent rock around this site, is porous, causing exposed strata at canyon rims to form a natural drainage outlet for upland aquifers, making possible the existence of these springs. Situated at the head of a canyon ravine immediately below the Upper Prairie Region of the Rolling Plains, the ancient springs have been a favored human habitat since the earliest human occupation in this region. Many nomadic tribes have used the site, leaving behind a wealth of archaeological evidence.

John A. Askins and his family settled near these springs in late 1883, and it became known to pioneers as Askins Springs. A traveling real estate developer called Dr. M. S. Crow arrived here in 1891 and was a driving force in the organization of the town of Dickens about a half-mile west of the Askins land. In 1891 he gave a speech proclaiming his intent to give ten acres around "Crow Springs," as he called them, to the town of Dickens. The new city park became known as Dickens Springs. Generations of Dickens citizens and tourists, attracted by the rugged and colorful scenery and the unique collection of plants, have visited this site for picnics and social gatherings. In 1978 the departments of Anthropology and of Park Management at Texas Tech University made an intensive survey of the land surrounding Dickens Springs. Though many artifacts were lost to souvenir hunters, the university workers uncovered a variety of ancient tools, rarely of local origin. In the 21st century, Dickens Springs continues to provide water and beauty to the area for modern visitors as it did for the nomadic peoples of the past. 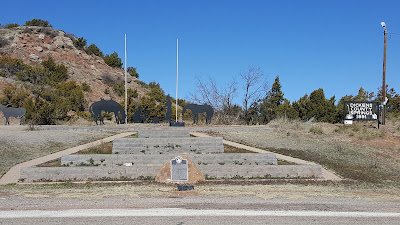 So we drove towards the springs and canyon area and about halfway down the entrance the road forks. Naturally I take the right fork. Not having ever been here before, we later learned I should've went left. You'll see why as you continue reading!

We arrive at the parking area for the Chuck Wagon (GC4ZZA4). A quick find of our first cache, and we go check out the chuck wagon. A makeshift replica of an old west covered wagon with a picnic table in the center. Hopefully in the hotter summer months, they have a canvas giving shade to those having a picnic. 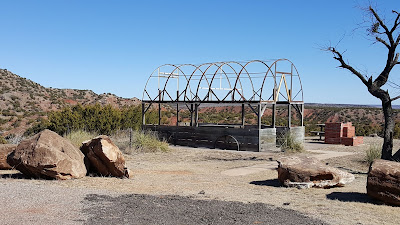 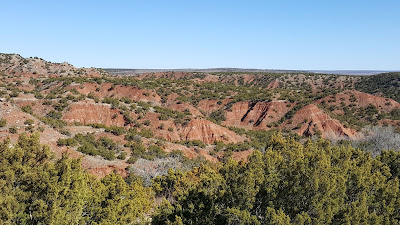 As you can see from the photo above, if you do decide to have a picnic here, you will have an incredible view of the canyon. Our next cache was called the "Forgotten Picnic Table" (GC552R2). Looking above at the picture again and the trees in the foreground, that's where the spring flows. That's also the location of our next cache. DOWN into the canyon! We started down what appeared to be several different trails leading down, but none panned out. So we just started bushwhacking our way through the trees, bushes, and thorns.

It's kinda hard to tell in the photo below, but the first is looking down through the trees what we had to get through. After about 30 minutes, we finally made it to the bottom and found the forgotten picnic table and the cache. 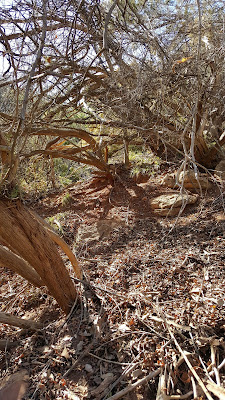 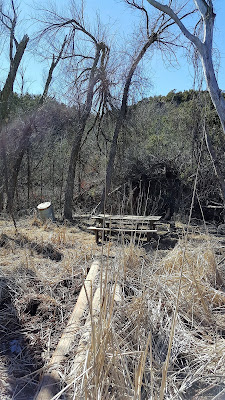 Now the next cache seemed to be in the direction of the top of canyon on the opposite side about 1/4 mile away. But before we climbed back up the opposite side, I wanted to find the origin of the spring. Plus it was kinda going in the same direction anyway. So we followed the small creek upstream to the spring. 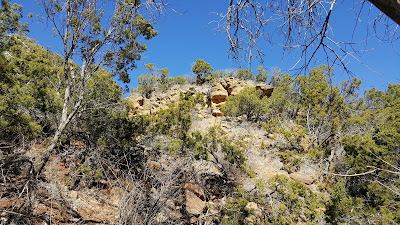 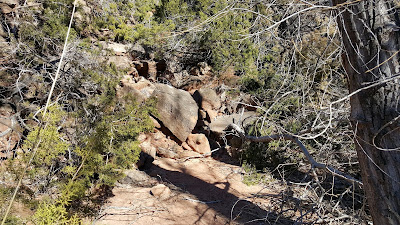 REALLY?! We arrive at the springs only to find stairs and a trail leading UP to the other parking area. Yeah, remember that fork in the road I mentioned? If we had taken the left fork, we could have parked and taken the easy way down into the canyon. I know, I know... where's the adventure in that right? So we check out the springs and take the trail up to the giant steel teepee covering another picnic table. 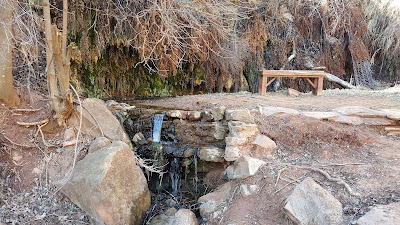 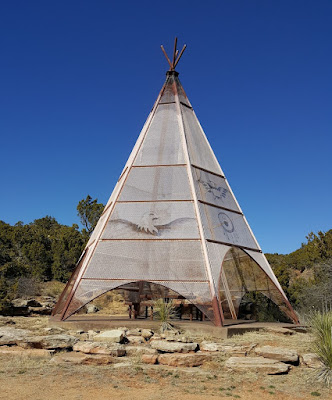 Now checking out the remaining caches, we were now closer to The Mystery of the Dug-Out-Mine cache (GCHYXZ). While not really a mine, this is actually a replica of the original first home built around 1878 by John Askins (even though the above sign at the entrance suggests 1883). The dugout was a common sense first home for early settlers in timber poor West Texas. John Askins traveled to Colorado City, TX for the tin used to roof his dugout. The remains of the original dugout were located about 200 yards to the south. But this method was a quick way to get shelter until more lumber or brick could be brought in to build a house. 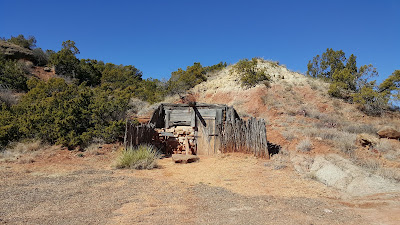 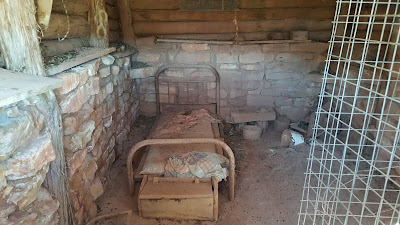 Looking back down the canyon from the cache in the above photo, if you look closely to the top right side, you can hopefully make out the frame of the chuck wagon. We bushwhacked our way down to the forgotten picnic table below the trees in the center of the photo. Then towards the camera to the right for the springs and up to the dugout house out of the photo to the right. Now the last cache was over to the top of the hill to the left side of the canyon. 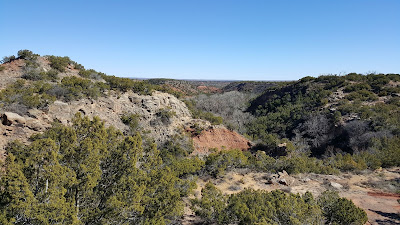 So we went back down the stairs to the spring and followed the creek a short ways until we got to within 200' of the cache (GCHYXW). Then it was climbing UP the side of the canyon through rock, sand, and trees to get to this boulder you see below. We searched for about 15 minutes without any luck. This cache on the opposite side of the canyon doesn't get looked for as often as the others. The last time it was found was in May of 2014. Since then there has only been one other cacher logging a DNF in March of 2015. And now almost another year later and our DNF. I don't like going through all this and not come away with a find. 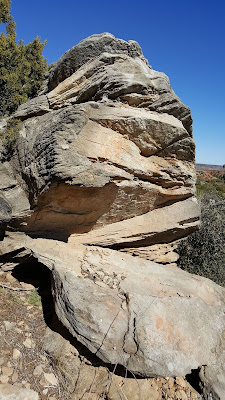 Having now hiked back down to the creek, we decided not to go the short route back to the car which would also require bushwhacking back up the canyon. Instead we went back up to the springs and the teepee parking area, and walked the road back to the fork and then down again to the chuck wagon and our car. I forgot how long a walk it was going around the long way, but it felt like a mile!

The last cache for the day was at the Dickens Cemetery (GC5HGQC). A quick find and we then headed back to Lubbock. Another long but adventurous day hiking in the wilderness. Yes, our muscles maybe a little sore, but definitely well worth it!
Posted by Mark at 10:16 AM